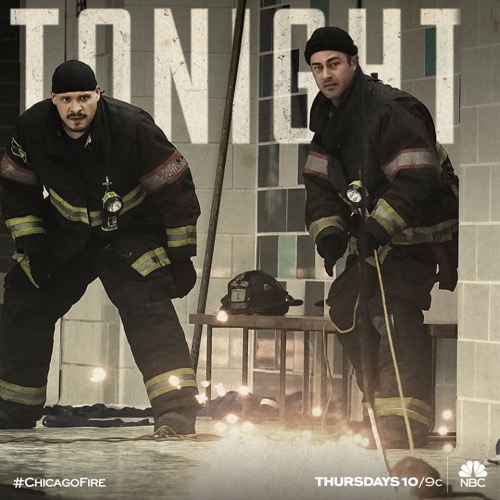 Tonight on NBC Chicago Fire returns with an all new Thursday, April 5, 2018, season 6 episode 17 called, “Put White on Me” and we have your Chicago Fire weekly recap below. On tonight’s Chicago Fire episode as per the NBC synopsis, “Boden has a lapse in judgment in the aftermath of rescuing a young boy. Kidd struggles to win the approval of Severide’s mom after a surprise visit and Otis takes on new responsibilities at the firehouse.”

Tonight’s Chicago Fire season 6 episode 17 looks like it is going to be great and you won’t want to miss it.   While you’re waiting for our recap make sure to check out all our Chicago Fire recaps, news, spoilers & more, right here!

Otis is in rehabilitation and trying his best to improve. Chief Wallace arrives and tells him that he can take a desk job at 51. Otis doesn’t seem happy about it but chief tells him he would be really happy to have there and would take it as a personal favor.

Time for morning roll call when Otis walks in, everyone is thrilled to see him except for Cordova. The alarm goes off, the team has to go.

They arrive at a pool and an electrical wire is loose because a scoreboard fell loose, children are being electrocuted. Cordova jumps into the water to save a child. Brett and Dawson check the two children her were electrocuted and take them to the hospital. There is one child who says he was in the pool alone, they bring him back to the station to try and figure out who he belongs to. Gabriella tells Sylvie that she dated Cordova once but it wasn’t serious. Captain wants to get rid of Cordova, Herrmann comes to his defense and reminds him that Cordova did jump into the pool to save the kid. Stella reminds Herrmann that she jumped into the pool first.

Kelly’s mom arrives at the station, he is happy to see her asks what she is doing there, she says to move in with him. Kelly tells his mom that he lives with Stella and she is welcome to stay with them if she wants. Kelly asks about the victims that were electrocuted, Gabriella tells him they are ok and are going to make it. When Kelly walks away, Sylvie tells her that Kelly still has a thing for her.

The kids are drawing pictures, Otis asks what his name is, the kid gives up his name, his parent’s names and the street he lives on. Otis finds where his parents live and Chief tells him to call them and tell them to pick up their kid. Kelly’s mom is talking to the crew and she tells them how he was named, after her father.

Chief Wallace walks in and Kelly’s mom is happy to see her when the kid’s father arrives at the station to pick up his kid. Stella goes to see Kelly and tells him that his mom hates her. Kelly says its impossible because his mother is a saint. Otis finished a day at his desk job and when he is leaving, the kid’s mother comes to the station to pick up her kid when she finds out that they already handed the kid over to his father and he is a lunatic and does not have custody of the kid.

Otis feels terrible, he apologizes to the mother who is very upset. Chief Wallace tells Otis it is not his fault, Chief is taking responsibility for this because he told Otis to call the father. Otis says the whole thing, meaning doing the desk job, was a bad idea and leaves.

Kelly and Stella are home, they arrive with Kelly’s mother – he tells Stella to calm down and let things breathe, not to force herself to be friends with his mother. Stella asks his mom about a church that she is opening up, it turns out that Stella used to live in the town where the church is going to be. Captain finds out that Gabriella dated Cordova and he is not happy that she didn’t tell him about it.

The next day, Stella and Kelly arrive at the station and Kelly is letting his mom borrow his car, she tells him that she is going to see his father and she wants to look into his eyes and let him know that he didn’t break her.

The alarm goes off, the rush to a shooting. Dawson and Brett are on the scene when shooting erupts, an ambulance from a private company arrives but leaves because they say they are out of boundaries. Chief, Cordova, and others arrive on the scene, they get the shooting to stop and help Dawson and Brett with the victims. At the hospital, the victims are going to make it, both are stable.

Kelly and Stella arrive home to find his mother and father, his mother announces that they are getting back together. Otis goes to see Chief Wallace and tells him that he will help out at the desk until he can get back to his job.