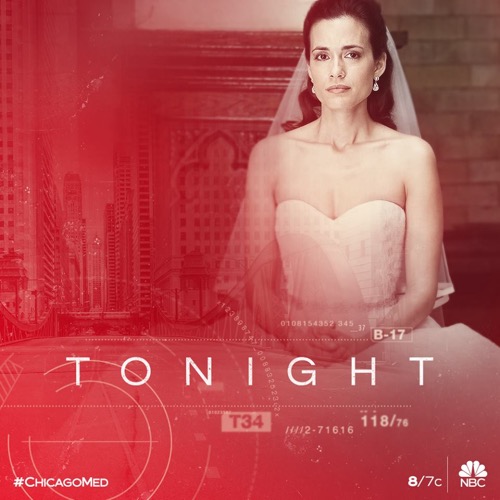 Tonight on NBC their medical drama Chicago Med airs with an all-new Wednesday, December 05, 2018, episode and we have your Chicago Med recap below. On tonight’s Chicago Med season 4 episode 9 Fall Finale called, “Death Do Us Part,” as per the NBC synopsis, “Will and Natalie prepare for their big day, but Will soon finds himself sidetracked. Dr. Charles disagrees with Goodwin on how to best handle a patient’s treatment while Dr. Choi and April are on their own when a pregnant woman delivers. Dr. Rhodes finds himself operating on a patient that is of great importance to Det. Halstead.”

Will broke tradition when he went to see Natalie before the wedding. He said he hadn’t been able to wait and neither could his future stepson. They both wanted to tell Natalie that she looked beautiful and she did. She was a vision in her white dress. It even got Will teary-eyed. He said he couldn’t wait to marry her and he knew that it was ever going to happen that he needed to get ready. The boys had left Natalie at the house and they had gotten ready elsewhere. Will was trying out his brand new tux when someone interrupted his final session with the tailors. The intruder as it turns out was Ray Burke’s son and he had gone to Will because he said his dad needed his help. Ray was feeling light-headed and he wasn’t able to stand for long periods of time.

The son was very concerned that something was seriously wrong and he had tried to talk to Ray about it, but Ray didn’t want to go to the hospital. He was too busy running around doing “errands” and so the son asked Will to go with him to see Ray in person. The doctor hadn’t really wanted to go and Ray’s son had to promise to return him before the wedding to get Will to comply. Will left in his tux and he went to go see Ray. And he noticed that Ray looked like crap. Ray knew that the feds were onto him and he was doing his best to shred everything. He didn’t have time to get checked out by the doctor and so his son had to guilt him. He didn’t want to lose his father and Ray had eventually consented to an exam.

Will went through everything and he told Ray what he suspects. He believed that Ray was suffering from a brain tumor and it could explain the results of the MRI. Will was about to convince Ray to go into the hospital when Ray’s other son came onto the scene and he had the bug in his hand. It was the same bug that Will planted at Ray’s house and the second son Tim that Will planted. It could explain why the feds go so much information on them right after Will began treating Ray and so they were going to kill Will for the betrayal. They took him to a dark room and Ray was going to do it himself. The only thing that stopped him had been the fact that there were too many loose ends.  There had been someone in his organization that flipped and Ray thought his sons had taken care of it.

Only the informant was rushed to the hospital in time. He went through surgery and had needed to recuperate though Will’s brother Jay didn’t have time. Jay went looking for his brother when Will never showed and he knew that Will left with Ray’s people. He also knew that Ray was cleaning house and he didn’t want his brother to end up like the guy that was sent to the hospital. Jay asked his only witness to brought out of sedation before he was ready and then he tried to get answers. Jay had been desperate to do what he did and frankly, he wasn’t the only one freaking out. Natalie wondered where her fiancée was and she thought the reason he had been so secretive was that he probably had doubts about the wedding.

Will meanwhile had found a saving grace. Ray had collapsed and he needed surgery to relieve some of the pressure on the brain. Will said that Ray needed to be taken to the hospital and neither Tim nor Tommy were going to allow that. They instead forced Will to carry out the procedure on his own. He drilled a hole into the side of Ray’s head and Ray soon regains consciousness. He still needed to be taken to the hospital because a hole in his head and so one of the brothers took their father to the hospital. They left behind Will with the other brother because someone was still needed to kill Will and so Will was pleading for his life when Jay showed. Jay and the feds arrived to just in time to save Will’s life and Will did his best to save the life of the man that was willing to kill him.

It was a hectic day and plenty of rules were broken at the hospital, but the cases that didn’t involve Will or what he went through were most likely going to be forgotten. No one will think about the baby that was born with a severe condition that meant she died on her first day of life and no one will think about the woman with a brain tumor that didn’t recognize her own husband. These people were going to be forgotten and so was the man that saved Will’s life because he was taken out of his coma too soon. He later died on the table and for what? Will was saved and his life was still taken him form him. It seems he needed to be taken into protective custody and so he only got the chance to say goodbye to Natalie before he was swept off to parts unknown.