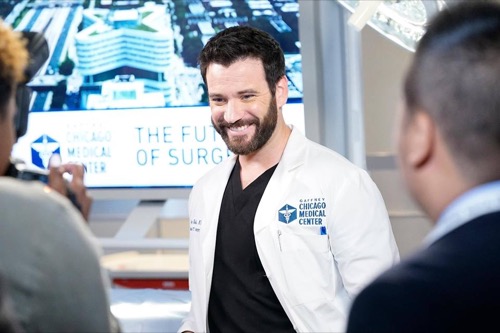 Tonight on NBC their medical drama Chicago Med airs with an all-new Wednesday, October 24, 2018, episode and we have your Chicago Med recap below. On tonight’s Chicago Med season 4 episode 5 called, “What You Don’t Know,” as per the NBC synopsis,“When things become complicated, Will is forced to lie to Natalie. Ethan and April find out some compromising information about Emily’s boyfriend and Ava is unsure of what to do with a patient who is refusing treatment.”

Dr. Halstead had gotten involved with a man like Ray Burke because he needed a cheap place to host his wedding. He thought that he could do this man a small favor and get a cheaper price on a much desired wedding venue however Ray was the one that changed their deal. He wanted more and more medical favors because he liked having Halstead treat him. He thought Halstead would do whatever he asked and unfortunately that led to Dr. Halstead becoming compromised. He broke several rules at the hospital to accommodate Ray and so the people that were watching Ray had realized they could also used Halstead. He was approached by CPD and they basically demanded that he work with them or risk being jailed by the feds.

Halstead hadn’t wanted to comply. He thought he could fight anything that came his way and that’s why he turned down Voight’s offer of becoming an informant for the CPD. It wasn’t until Halstead had run into a problem at work that he saw for himself that often the right thing to do is sometimes going to be difficult. Halstead agreed to work with CPD a while back and now they were demanding things of him. He was supposed to be getting married and instead he worried about taking down a mob boss. Halstead was distracted all the time and his fiancée Dr. Manning was beginning to notice that something was off. She tried asking him if he was okay and when they hadn’t gone anywhere she talked about it with a friend at the hospital.

Maggie told Manning that it could just be wedding jitters and so Manning put it in the back of her mind. She thought she was making something out of nothing and she let it go because she didn’t want to push only to learn that she was wrong. Manning put her attention back on her patients and unfortunately her patient was a teenager showing some worrying signs. Neela Griggs was in high school and she bruises around her neck that she said she got when she was playing with her friends. Her mother also said that she had been “off”. The teenager had said that her mother was exaggerating and so Manning asked the mother to leave the room, but then she asked Neela to put on a hospital gown and she had seen the bruises all over Neela’s body.

The bruises were consisted with being held down and so Neela’s mother had a right to be concerned because Manning believed that Neela was the victim of a sexual assault. She informed Ms. Griggs of what she found and together they tried to talk Neela. They were hoping to get an answer from her about what happened and they tried to be supportive. It’s just nothing worked. Neela refused to say that she was raped and she was denying consent for a rape kit. She was underage and so her mom could still decide certain things, only forcing a rape kit on someone that doesn’t want it would almost certainly traumatize the victim. Neela said nothing happened and none of the adults knew what to do.

Ms. Griggs still wanted to go ahead with the rape kit. She said that she was sure of it and so she wanted Dr. Manning to follow her directions. Only Manning wouldn’t do that. She wasn’t going to go through with the rape kit as long as Neela said no and so Ms. Griggs demanded that her daughter be discharged. She wanted to take her daughter to another hospital that would do the rape kit and as she was walking away she began to break down. Ms. Griggs knew that forcing the matter wasn’t what her daughter needed and she confessed to Manning that she wanted it done because she had been raped when she was Neela’s age. She didn’t tell anyone because she had felt ashamed of what happened and she said she still felt that way.

Dr. Manning was the first person Ms. Griggs ever told about her rape. The doctor advised the mother to tell Neela what happened and see if that gets through to her. Manning had watched as secrets came between a mother and her daughter and she realized she was being lied to by her own fiancée. Dr. Halstead had gone to see Ray another time and after that Ray set his sons to go fetch Halstead from the hospital because he wasn’t honest during the first exam. And, you know what, Manning had seen Halstead being marched out of the hospital. She wasn’t able to go after him because Neela agreed to an exam and so she had stayed for her patient despite knowing that something was off.

Dr. Choi had found out something was off with his sister’s new boyfriend when Bernie came to the hospital drunk. He gave up on his sobriety because he had secrets he didn’t want anyone else knowing about and it turns out his secrets came out anyway. Bernie was married. He had a wife and a teenage daughter. Bernie also bought a new house with his family and so he hadn’t wanted to give up on what he had with them. Then again he was starting a new life with Choi’s sister Emily and was about to have a new baby with her. So once Dr. Choi found out what happened, he tricked both women into coming to the hospital at the same time and they met. It led to an ugly confrontation and Bernie’s wife basically dumped. And so Dr. Choi thought Emily would dump Bernie as well.

Emily instead blamed her brother for embarrassing her and she said she was going to make things work with Bernie because they were having a baby together. It was Dr. Choi that found himself getting the cold-shoulder and all he did was make Emily face the truth, but Dr. Manning did push Halstead and all she got was lies. Her fiancée was he was distracted because he was treating Ray on the side and he wasn’t doing it for the right reasons. Halstead made her believe that he was doing everything for that wedding venue and Manning told him not to be too hard on himself. Which did make him feel horrible for all the secrets he was keeping and lies he was telling.

Dr. Charles had a patient that seemingly allowed himself to die for no reason. He was sick and hadn’t wanted to tell his son that he was passing on a genetic disease that would one day end both of their lives. And so this man died and Dr. Charles suggested to the son that he should get an autopsy done on his father.

The autopsy would allow the truth to come out and there was no to push back at Dr. Charles for what he did.