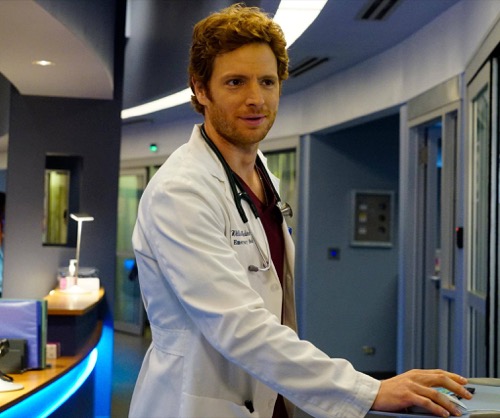 Tonight on NBC their medical drama Chicago Med airs with an all-new Tuesday, April 10, 2018, episode and we have your Chicago Med recap below. On tonight’s Chicago Med season 3 episode 15 as per the NBC synopsis, “Dr. Charles and Dr. Reese search for answers when a mother brings in her daughter claiming she is possessed. Dr. Rhodes and Dr. Bekker are tasked with finding a way to save a pair of conjoined twins. Dr. Halstead struggles to get Dr. Manning’s attention. Maggie measures her options in the wake of her recent actions.”

Ethan and April are walking on the street. Emily comes up to them. She has been evicted. She asks Ethan if she can crash at his place. He says no immediately. April pulls him aside. She thinks he should help her out. He agrees. They continue on their way to work. A man pulls up to the front of the hospital. He has his daughter in the car. She is shaking and screaming.

Sarah’s dad comes up to Daniel. He is having ectopic heartbeats. He needs to get on that transplant list. If he needs to separate himself from Sarah he will. He walks up to Sarah and tells her they can longer have a relationship. Sarah is shocked and hurt. Her dad walks away.

Ethan comes to see Daniel about the young woman Katherine they have taken in. Katherine is still shaking as her father explains that she was being held at his ex-wife’s house. They think they need to do a psyche evaluation. The ex-wife comes rushing in. She tells them all her daughter is fighting a demon. She needs to take her home to exercise her.

Natalie meets with parents who have screaming crying twins. One of them is very sick. The parents reveal that they are conjoined.

Will meets with a man who is having belly pain. He is short of breath and thinks he just needs antibiotics. He tells Will he has diverticulitis.

Maggie talks with Sharon. She is in trouble for performing a crike on a patient.

Daniel and Sarah sit with Katherine’s father. He details a nasty divorce from his ex-years back and how he recently picked back up with his daughter.

Will meets with Malcolm who was short of breath. Will tells him he is certain he does not have diverticulitis. Malcom just wants meds and he wants to go home. His son and wife plead with him. He needs to let the doctors look at him. He begins coughing and sprays blood across the room. Will tries to put in a chest tube. Fluid from his lymphatic system pours out. They rush him to the OR.

Daniel and Sarah only have so much time before Katherine will be discharged. They decide they are going to talk to the demon.

Maggie runs into her patient in the front lobby. They get to talking. She shares that her license expired two weeks ago. She doesn’t know what to do now. She is definitely going to be suspended.

Connor and the rest of the team cannot figure a way around separating the twins. They decide to tell the parents that Lily will die once they separate them.

Daniel and Sarah meet with Katherine. Sarah thinks she is just yelling gibberish but Daniel thinks she is trying to tell them something.

Maggie arrives to her hearing. Sharon tells her that she isn’t being sued.

Connor tells the parents of the twins that there is a riskier option that could lead to death for both the twins. They take it. The rest of the team is upset.

Will tells Malcolm and his family that he has inflammation of the lungs. Malcolm wants to talk to Will alone. His family leaves. He is angry that Will ran all of these tests. He should have let him die. Now he needs to pull his son out of college because they cannot afford all of this.

Daniel and Sarah sit with Katherine’s parents. Daniel has figured out that some of what Katherine is saying comes from a book her dad used to read her. Katherine is wheeled in to see them. Daniel reads from the book. Katherine goes crazy. It dawns on them that her father molested her. He rushes out of the room angry. The mother cries hysterically. Sarah chases after him yelling. Daniel reprimands her.

In surgery, Connor managed to save both the twins by repairing their heart valves. Meanwhile, Natalie reminds Will that she asked for a break.

April and Ethan arrive home. Emily has the place looking great with dinner in the oven. April goes into the bathroom. There is an ashtray in there. She calls Em in. She pleads with April not to tell her brother. She only had a few people over.