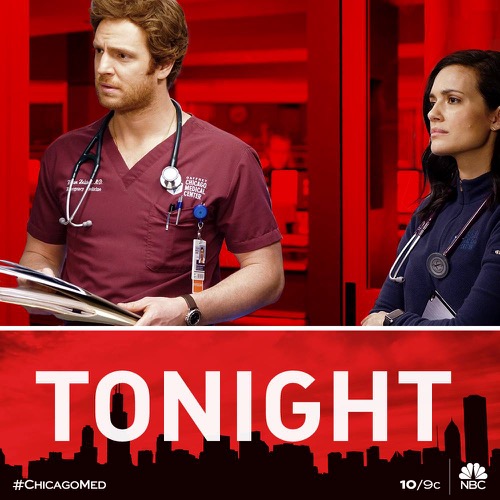 Tonight on NBC their medical drama Chicago Med airs with an all-new Tuesday, April 24, 2018, episode and we have your Chicago Med recap below. On tonight’s Chicago Med season 3 episode 24 as per the NBC synopsis, “After a 10-year-old boy is admitted to the hospital, Dr. Manning and Dr. Halstead disagree on how to best handle the boy’s parents. Dr. Rhodes rushes to fix a heart that will be given to Dr. Reese’s estranged father.”

Ethan is annoyed that his sister still has his car. April offers to give him a ride. Meanwhile, Connor checks out Sarah’s father. He is getting worse. Connor reports to Sarah to tell her that they are doing all they can to find him a new heart but she may want to say goodbye today.

Ethan meets with a homeless teen boy, Josh. He wants to check his blood. Emily shows up. Ethan gives her the cold shoulder. Ethan tells Josh that he has lymphoblasts in his blood. He needs to get to the hospital. Josh doesn’t want to leave his dog. Emily talks him into going.

Will and Natalie are still not speaking. They are given a new patient named Kevin, a young boy with abdominal pain. His parents inform them that Kevin has PANDAS. Will wants to run some tests to see if it is an ulcer, Crohn’s disease and more.

Outside of Kevin’s room, Will tells Natalie that he thinks it is possible Kevin doesn’t have PANDAS and has been misdiagnosed. He thinks that many are quick to diagnosis patients with PANDAS now. Depending on what he has been put on he could have a superinfection.

An older man named Frank with dementia has been brought in. He is out of it. His daughter has brought him in. She doesn’t know what is wrong with him.

Daniel pays a visit to Sarah’s father. Daniel tells him he is sorry about his situation. They begin to argue back and forth. Sarah’s dad blames Daniel for cutting Sarah out of his life.

Becker sits with Conner’s father who has brought her coffee in the hospital sitting area. She thanks him for the flowers he sent earlier. He asks her to go out to dinner. She tells him that she wants their relationship to stay on a professional level.

Connor is given a new patient, a man who has been shot in the head, who is not responding to light. They determined quickly that he is brain dead. Connor wants to use him as a donor.

Will and Natalie report back to Kevin’s parents. He has an infection in the colon, an opportunistic infection due to the long-term use of antibiotics. The parents want to bring him back to the doctor who has been treating him with antibiotics for far too long. Will and Natalie argue after leaving the parents about what they should do with Kevin.

Ethan has discovered that Josh has leukemia. He goes to Daniel for help.

Connor tells Becker the man who was shot is a match for his patient who needs a heart. The donor’s heart needs a valve repair but he will make it work.

April and her resident inform the daughter of the older man that he has overdosed on an opioid. She tells them her dad doesn’t do drugs. They administer Narcan and run the tests again. Back in the room, April sees the patient’s jacket. There is a white powder on it. They leave the room quickly. They think it is fentanyl.

Maggie tells Cesar to strip down. He could have come in contact with traces of the fentanyl. Meanwhile, Will pulls Kevin’s parents aside. He tells them that Kevin needs surgery. They are running out of time. Natalie tells them she will call Kevin’s GP.

Will is annoyed with Natalie. She fights him every step of the way. The conversation moves to their break-up. He thinks she acts superior to him and everyone else.

Ethan calls Josh’s parents. Emily cannot believe he did that. He tells her Josh is going to need a stable environment.

Natalie confronts Kevin’s mom in the bathroom. She has noticed that her hands are raw, she washed them. She has OCD and it is genetic. Kevin’s mother doesn’t want to address the problem and stress out her husband.

Sarah sees the older man’s daughter crying. She sits to talk to her about her dad and his dementia and the trouble he ran into today. The daughter wonders if she is horrible if sometimes she thinks it was easier if her dad wasn’t around.

Daniel reports back to Ethan. He thinks Josh has detachment disorder but he has a will to live.

Connor works with Becker to get his heart for the patient who needs it.

Maggie decides to keep the hospital on bypass because of the fentanyl. Sharon tells her she will deal with the board. Meanwhile, Josh’s parents have come in. Ethan tells them that they need to be calm and caring. He brings them to see Josh. His bed is empty. Ethan discovers that Josh left with a young woman.

Sharon arrives at a board meeting. She interrupts to inform the room that they need to stay on bypass, they owe it to their patients. She leaves. Peter comes out after her and tells her that the board thinks she has been making the wrong calls lately.

Sarah goes to visit her father. She wants to see how he is doing. He thinks she is visiting out of guilt. Maybe she has a personality disorder, he jokes. He is sarcastic. He asks her what he can do to make her feel better. She walks out of the room. Connor is outside. He tells her he has found her father a heart.

Ethan heads back to where Josh lives. Emily is there. She tells Ethan that he needs his dog. Ethan agrees to take the dog.

The older man with dementia needs to be incubated. He is in PEA. They work to revive him. He dies. His daughter sobs.

Will and Natalie come back to Kevin’s parents. They need to do something. Kevin’s mother finally breaks down and tells them to do the surgery. She turns to her husband and tells him she has OCD. It is genetic. She didn’t want to tell him because she thought he wouldn’t love her. He walks away.

Connor talks to Sarah. Her father has a temp of 99 so they cannot do the surgery. She reassures him her father always runs warm. He is fine.

Connor and Becker come out of surgery. The transplant was a success. Connor admits to her that he isn’t upset about her talking to his dad. He doesn’t want her to date, anyone.

Josh arrives back at the hospital to see his parents. They are happy to see him and want to take his dog. They just want him to get better. Ethan thanks Emily for her help today.

April and her brother watch as the woman says goodbye to her father.

Natalie tells Kevin’s mom he is okay. She tells Will she isn’t perfect. She has a lot of fears. He tells her it is okay, he understands.

Sarah goes to look in on her dad. Daniel comes to see her. She asks him what she does now that her dad is going to live.