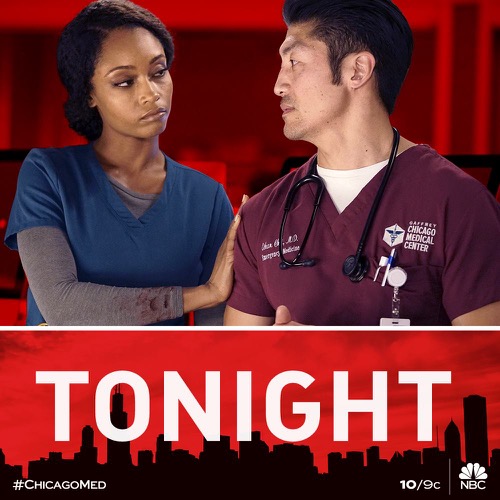 Tonight on NBC their medical drama Chicago Med airs with an all-new Tuesday, May 1, 2018, episode and we have your Chicago Med recap below. On tonight’s Chicago Med season 3 episode 18 as per the NBC synopsis, “After a shooting occurs during a block party at a local park, Med is overrun with victims that stretch the hospital and staff to its limits. In the midst of the chaos, Dr. Choi devises a new mass casualty plan on the fly and Dr. Manning struggles to stay focused when she realizes her son and nanny might have been at the scene.”

Someone opened fire in Millennium Park and there are many victims, Sharon is outside the hospital when they arrive. The hospital struggles to handle the aftermath of the mass shooting at a Chicago block party. Sharon is trying to calm down a patient who is freaking out because the blood is not hers. Dr, Charles comes in to assist, he tries to calm her down, her name is Jill. Meanwhile, a guy passes out in front of Emily, they get him on IV fluids. Meanwhile, Dr. Choi is trying his best but needs to get patients to surgery, Sharon tells him to set it up in triage and she will take care of the rest. A patient tells Dr. Sarah that he feels bad that he saw the shooter and did nothing.

Dr. Daniel is dealing with another patient who his name is Roger and doesn’t know why he is there. Dr. Daniel convinces him to be seen by ER. Sharon is in control, she is getting everyone moving. Dr. Halstead tells Sharon that the nurses need to move faster and help him. Nurse April brings in a child and everyone tries to stay focused. Another child comes in and she is upset, she just wants her mom. Sharon is keeping watch to make sure everything is going smoothly.

Tragically, one of the young boys that came in has died. Dr. Daniel is with his patient and he is confused and doesn’t realize what happened. Dr. Daniel moves over to another patient named Trevor, who needs pressure applied to his neck. Another patient has come into Dr. Choi, they are coming in one after the other. Apparently, the shooter is still out there and patients are coming in one after the other. Dr. Connor is working on a patient and OR is packed, Dr. Choi comes in to help – there is blood everywhere.

Dr. Layton arrives in the lounge and finds Dr. Connor operating on a patient and tells him to scrub in. Meanwhile, Dr. Daniel is with his patient and still putting pressure on his neck wound; the patient tells him that he lost his wife, she was a good person and he really doesn’t deserve his help, he just let him go. Dr. Daniel tells him not to feel guilty that he survived, there are a lot of people that probably feel the same way.

The belief is that the shooter might actually be in the hospital, white male, dark hair. Dr, Natalie reaches out to Jay that her son and the nanny may have been at the park, he says he can’t help her because they are still waiting to find the shooter.

Dr. Layton is performing surgery with Dr. Connor who wants to rush the procedure and move on to the next patient.

A lady and a man are fighting over a backpack, it belongs to the man, but the woman is just upset because she thought the backpack was her sons.

Emily looks upset, there are a lot of people bleeding in the waiting room and she doesn’t know a way to do.

It looks like they may have found their shooter in the hospital there is a suspicious man in the emergency room.

Another young man is dead while he was waiting for care, he is the son of the mother who believed the backpack belonged to him.

Emily is helping volunteers in emergency helping patients with the care they need.

The guy who has to apply pressure to his neck, who Dr. Daniel was caring for, is looking suspicious. Another patient, Roger, recognizes him, perhaps this is the real shooter as the previous one was a false ID.

All of a sudden Dr. Daniel notices that the guy who Roger thinks is the shooter has vanished. Dr. Daniel finds the guy, he is in bad shape and has to go into surgery. Meanwhile, the mom of the young man finds out her son is gone and is in shock. Everyone is exhausted, Dr. Nathalie finally finds her son Owen and is thrilled; he was at the park, but when his nanny heard the gunfire, they left.

Dr. Choi says that this is the most gratifying day as a doctor, he doesn’t know what to feel. Peter tells Sharon she did a phenomenal job, he tells her she is going to get her CT scanner that she wanted, she tells him she wants much more. Sharon tells Dr. Daniel that she knows he had to save him, meaning the shooter, and it’s ok.