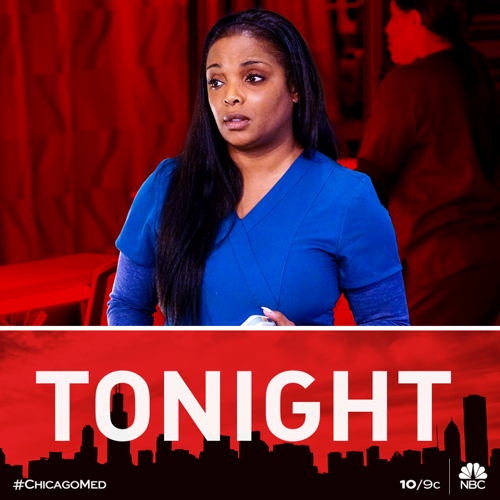 Tonight on NBC their medical drama Chicago Med airs with an all-new Tuesday, May 8, 2018, episode and we have your Chicago Med recap below. On tonight’s Chicago Med season 3 episode 19 as per the NBC synopsis, “Dr. Manning rushes to save a young boy who has a life-threatening case of the flu. After discovering that opioid pain killers were stolen during last week’s mass casualty, April believes Dr. Choi’s sister took them. Dr. Rhodes and Dr. Bekker disagree over the best treatment for a cardiac patient who is 21 weeks pregnant.”

Emily is at a party. She calls Ethan. There is a guy who is overdosing. Ethan arrives. The man is on the floor. His name is Jeremy. He can’t breathe. Ethan opens up his airway with a pen.

Sharon talks to the nurses. There are 40 pills of Percocet missing. They will be implementing new rules. Meanwhile, Dennis gets a strange envelope slipped under his door.

A young woman named Tracy is brought in with her mother. She is pregnant. Natalie checks her heart. She hears a murmur.

Sarah goes to visit her father in his hospital room. She tells him he will be back on solid foods. He thanks her for all her help. He asks her if she could check his mail at his apartment. She tells him she has rounds at the jail. She can do it later.

Dennis brings the envelope to Sharon. It is newspaper clippings of missing college females where Sarah’s father worked. Someone is trying to tell Dennis something.

Ethan brings Jeremy into the ER. Emily waits. He is going to be all right. It was heroin. April cannot believe Emily was at a party like that.

Becker is in the OR. They are all having a mock surgery on twins. Alarms go off. She has killed them.

Becker and Rhodes come to see Tracy. They tell her that her mitral valve is weak and needs to be replaced. They think that she needs to terminate her pregnancy in order to survive. Tracy refuses. Her husband was killed in a car accident months ago. This is all she has left of him.

Connor talks to Ava. He thinks there is another way to save Tracy and her baby.

A young boy named Cody is brought in. Will and Natalie look him over. He has the flu.

The mother is scared. Cody won’t stop coughing. They order a chest x-ray. Connor is operating on Tracy. They do not have the right size valve, they will need to use a mechanical valve.

Daniel and Sarah go to her father’s apartment. She goes to get some clothes for him while Daniel goes to his office to grab a book for him. He sees a picture of her father with his students. One of the women in the picture is a missing female he saw in the newspaper clipping.

Emily shows up at work. Ethan is surprised she is on time. She thanks him for helping out this morning.

April comes up to Ethan and asks him if he thinks Emily is the one who took the Percocet. Ethan doesn’t think so. April points out that she has really expensive shoes. Maybe she sold the Percocet for money.

Daniel tells Sharon about what he saw in Sarah’s father’s apartment.

The young boy Cody’s heart rate begins to drop. Meanwhile, the widow of the heart donor who helped Sarah’s dad comes to see him.

Will looks for an ISO room for Cody. Jeremy begins to seize. Ethan checks his labs. He has Percocet in his system. Ethan tells April what he has found.

Daniel goes to visit Sarah’s father. They talk about books before he is taken away for his exercise. After he is wheeled out of the room, Daniel goes through the box in his room. He finds a yellow receipt and takes it.

Connor’s surgery on Tracy is a success.

Natalie thinks Cody has mastocytosis. Will doesn’t think so. She is diagnosing off of a rash on his arm. Cody cannot breathe because oxygen cannot penetrate his lungs. Will backs her up. They inform Cody’s mother.

Daniel tells Sharon he is leaving for a couple of hours. Sarah’s father has a storage facility he wants to check out. Meanwhile, Rhodes and Becker are called to see Tracy. She is hemorrhaging. Rhodes wants to take her to the OR. Connor is determined to save both of them. He calls for the blood thinners to be stopped.

Ethan confronts Emily. She swears she didn’t take the Percocet. She asks if April put him up to this. She takes her vest off and quiets.

Tracy is clotting. Her heart rate is down. On their way to the OR, she begins crashing. They paddle her. No pulse. Connor calls for more Epi. Rhodes tells him to stop. She is gone. Her mother sobs. Later, the mother blames Connor for talking her daughter into keeping the baby.

Cody is getting worse. Natalie tells Will she has made a huge mistake. He tells her she was right. His test proves he has mastocytosis.

Jeremy comes to and tells Ethan that he took the pills from his father’s medicine cabinet. Ethan is mad at himself. He leaves to find Emily.

Cody’s mother hugs Natalie. Cody’s stats are back to normal.

Rhodes is back in the OR ready to perform a mock surgery. Connor comes in. He will like to remove himself from the team. He doesn’t trust his judgment.

April goes back to talk to Jeremy. He admits that Emily sold them to him. Meanwhile, Ethan arrives home with a note from Emily that she is gone to Vegas.

Daniel opens the storage locker and goes through it. Will visits his brother and asks him he still has their mother’s wedding ring.