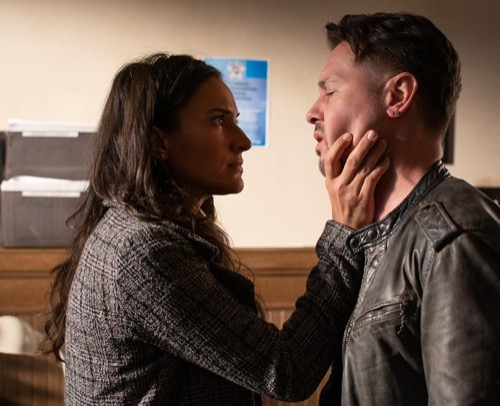 Chicago PD begins tonight with Adam Ruzek (Patrick John Flueger) showing Hailey Upton (Tracey Spiridakos) the apartment he is looking at, hoping she will at least spend some time with him there. They begin to make out on the counter but are quickly interrupted by a call. Antonio Dawson (Jon Seda) is at the doctor’s when Adam calls him, but he rejects it. There is nothing wrong with his shoulder and is told to give it more rest; but when he asks for a refill for the oxys, Antonio gets frustrated saying he isn’t a junkie; the doctor says he can lose his license and Antonio takes off.

At home, Antonio finds an empty prescription bottle and punches out the mirror in the bathroom. His daughter sees it, wondering if he is really okay. He suggests she finds her notebook and get back to the library at school. Antonio ignores another call from Adam, who is with Sgt Hank Voight (Jason Beghe) and Hailey; he informs them, Jay Halstead (Jesse Lee Soffer) and Kevin Atwater (LaRoyce Hawkins) they found a stash house to hit and want to see what they can find; Kim Burgess (Marina Squerciati) admits she can’t get a hold of Antonio either.

Voight tells them to hit the house and he will see them back at the district. They find bags and bags of drugs inside, arresting several people with Kim giving chase to one suspect who escapes, but she is on her own in the alley. She orders the guy to put his hands in the air and about to arrest him, but when he turns around he tells her not to shoot as its Antonio.

He says he got a tip from a CI 20 minutes earlier and it is a big deal because Kim almost shot him. Adam doesn’t want to pry but Antonio tells him he was doing undercover work and that is the end of the story; Adam says if it was one of them, he would want their ass. Kevin advises them to leave it alone for now as there are too many eyes around; Kim is not okay with what happened. Antonio gets into his car with a bottle full of pills, Kim asks Antonio for a ride seeing the bottle and takes them, saying she will report them. He insists he is fine when she asks if something is going on.

Back at HQ, Jay reveals Patrick Carter is a mid-level and all his priors are cocaine related. They have 11 overdoses in the last month. Antonio wants to question him but Voight says he lawyered up the second he went into an interrogation. Voight questions Antonio flying solo at the drug house and why he ran. Voight thanks him for his version, but it’s clear he is questioning it. Antonio goes to see Patrick in lockup, whose furious Antonio didn’t keep him out of lockup even though he supplied him the pills. He wants Patrick to flip in order to get him full immunity; even threatening to bury him if he speaks.

Antonio tells Voight that Carter will flip for immunity, asking since when Voight cared about optics. Voight demands to know what is going on as Antonio doesn’t look so good. Once Antonio leaves, Voight asks Trudy Platt (Amy Morton) to move Carter, so Antonio is unable to see him. Antonio turns to the streets for oxys as he returns to his car, Voight grabs the drugs Antonio just bought and dumps it on the ground.

Voight promises to get him through this as Antonio breaks down, apologizing as he doesn’t know what happened. Antonio reveals he knows Carter because he was also Antonio’s supplier; Voight says they will deal with it too but for now they need to get him clean. Voight sees smashed mirror and looks through drawers, ordering Antonio to pack a bag and going into rapid detox as he covers for him. Antonio gets a call from Ava’s phone, realizing someone just kidnapped his daughter!

Antonio sits in Ava’s room, looking at the pictures when Voight tells him to get his head on straight as the rest of the team is there. There is no sign of forced entry nor struggle; Antonio says it’s obvious she never made it home, as her backpack isn’t on the kitchen counter. Antonio reveals to them he wasn’t at the drug house to make a bust, he was there to score oxys for himself.

Adam and Voight go to see Carter, demanding to know where Antonio’s daughter. Carter says he isn’t stupid enough to kidnap at cop’s daughter. Voight tells him he better hope he’s telling the truth, or they will have a problem. Trudy stops Antonio, saying no one has seen nor spoken to him other than Antonio and that conversation should be accidentally erased. Voight wants to know how Antonio wants to handle this. He doesn’t care, whatever gives them the best chances of getting his daughter back.

Jay and Hailey just found a witness, who says she saw a man and woman arguing. She is able to describe the man but never seen him before. Hailey spots a camera, showing everyone, including Antonio how Ava is beaten and shoved into a trunk of a car. Voight holds him as they run the plate belonging to a Jason Rizzo; Antonio recognizes him as someone who worked for Carter. He has served time for aggravated assault and statutory rape. Voight tells them from this moment forward they are off the books and anyone can walk, no one will judge them. Everyone agrees to go get Ava!

Jay kicks in the front door, they find a man in the room who says he is scared of Rizzo, who is an addict and won’t move out. He didn’t see him with anyone. Jay tells him to sit down and shut up. Antonio searches the attic, finding a bottle of pills, hides it in his hands when Jay calls him into the garage where he confirms the backpack covered in blood is Ava’s.

They found zip ties and duct tape; rushing off to find witnesses on the streets, but Antonio gets a call from the abductor who gives them 4 hours to free Carter or Ava gets a bullet in her head. He needs to know his daughter is alive or no deal. Antonio promises he is coming for her and for to stay strong, he hangs up on Antonio and Voight tells them to get out there.

Voight and Adam return to the cage, ordering Kevin to keep Antonio away. Voight grabs Carter’s hair who reveals Rizzo has been helping him out lately and knows Antonio because he delivered a package to his house last week. He only knows if the cops don’t do what Rizzo says, he will kill her. Voight leaves the cage, without saying a word.

Voight meets with Sam, saying he wants Carter to walk on this case as there are unintended consequences and he has to be released within the next 3 hours. He reveals one of his guys is jammed up bad and will make it up down the road. Antonio is told to calm down from Trudy as his ex-wife comes in; he reveals Ava has been kidnapped. She says this can’t be happening again and told him to quit this job when their son, Diego was taken and he chose this job over their family; she hopes his choice was worth it, walking away after she slaps him.

Voight goes to see Katherine Brennan who wants to know what he is thinking. He explains that one of his guys has a real problem and the only way to fix it is to do this favor; she says her hands are tied as a press conference has already been held and there is nothing she can do. Voight returns to Carter, telling him he has 30 seconds to give him info on Rizzo, putting on gloves, punching him and choking him. He lets Carter go after punching him again; he gives him a name as Voight strangles his throat. Voight tells him he might get to live if they find Antonio’s daughter!

The IU arrive at a scrapyard to talk to Danny McCoy, asking him about Jason Rizzo. He claims it is none of their business, but they find Rizzo’s car and tell him to start talking before things get bad. He shoves Hailey as Kevin, Adam, and Jay force him to apologize. He gives them the make and model and the team finds an address, where Voight tells them to “hit it”. Voight needs Antonio to hang back but he refuses.

Inside the building, Antonio kicks the door in, calling out for Ava. They arrested several people as Antonio finds a badly beaten Ava; Voight orders for an immediate ambulance. Antonio grabs the EMT, who saw scratches by her waist and down below and they need to do a rape kit; he leaves with them as Voight tells the rest of the team to fan out and find the prick.

Ava apologizes for allowing the man to push her into the car; he promises they are going to find him and he will pay. Ava says he didn’t say anything, he only wanted drugs; took her ATM card. Kim and Kevin found the ATM he used 10 minutes ago, confirming a location where he would get his drugs at an old factory.

They quickly find him as Voight and Adam chase after him into the building. Adam quickly subdues him as Voight begs him to make a move. Antonio begs Voight to let him have it; Voight takes his gun and tells Adam to let him go; Antonio begins to beat him. Voight pulls him off when he said it was enough. Rizzo asks Antonio if his daughter was 18 because she was so good, Antonio charges at him and he flies throw the wall to the concrete ground below. Adam and Voight learn Antonio is not clean; he tells them to stop talking when they hear sirens. Adam says, “What the hell are we going to do?”