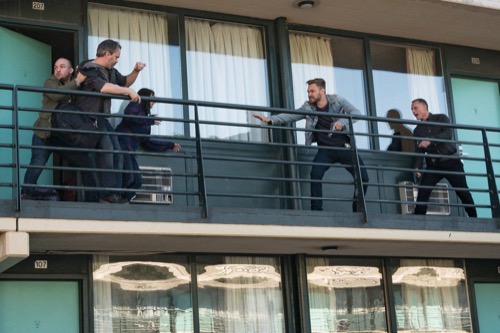 Chicago PD begins tonight with the IU team are celebrating 25 years with CPD for Sgt Trudy Platt (Amy Morton), who insists she used to play Varsity soccer, as Antonio Dawson (Jon Seda) jokes that her coach must have been Jesus. Sgt Hank Voight (Jason Beghe) gets a cal from a CI about a drug mule showing up at his hotel and they are off.

A man exits Room 240 and Adam Ruzek (Patrick John Flueger) tells the man to stop, he shoves another civilian before jumping down onto another car. When he draws his gun, Voight, Adam, Jay Halstead (Jesse Lee Soffer), Hailey Upton (Tracy Spiridakos) open fire, as well as Kevin Atwater (LaRoyce Hawkins) and Kim Burgess (Marina Squerciati) who were still in the parking lot. Voight and Adam enter the hotel room where they find the young drug mule, gutted open and dead in the bathtub.

The ME is able to identify the DOA and her name is Gloria Sanchez; it appears she was alive when they cut her open. They find a UV stamp from a nightclub on her hand, which they find odd since she had over a kilo of “blow” inside of her. The John Doe that the IU shot was Miguel Lopez, the stamp matches the logo at the Scorpion Club; Voight wants them to run the owner and every employee as this is now a homicide.

Upton goes undercover as Riley, saying her friend Katie sent her there to look for the hot bartender, who could get her some blow. She is able to get him away from the bar and he is willing to exchange drugs for some sex, but she says she is seeing someone. When he takes the money from her, she suggests her rich boyfriend would love to deal with him; showing the very expensive bracelet he got her on their third date.

The next day, Adam and Hailey meet with the bartender who says he can hook “Jake” (Adam) up with Spiro who runs the Scorpion Club and can get his hands on any weight but Larry wants 10% commission on all deals. They discuss the case back at HQ, where Jay reveals they have 10 exotic dancers who frequent the border. Voight wants Adam to get and Hailey to get in with this guy and make a deal. Larry is quick to introduce Jake and Riley to Spiro (Eric Balfour), who is suspicious of Jake, but he is quick to play the game. Spiro takes a photo of his driver’s license and suddenly Adam cuts audio when he sees Bob Ruzek (Jack Coleman) is working for Spiro.

Adam goes to see his dad, who says he never gave him up, figuring he was undercover. Adam says he cannot talk about the case but would like to know why his dad is working for the owner of a strip club. Bob swears there is nothing else he needs to know about and Adam promises his name will not appear on any paperwork. He asks about Rita Moore, who turns out to be Spiro’s lady friend and they find pictures of Rita with Gloria in the background, the same day Gloria was murdered.

They bring her in and Voight and Upton interrogate her, but she insists Spiro is a good guy. She sees a photo of Gloria all gutted out in the bathtub as Voight wants to know what happened that night. She says Gloria showed up, saying she wasn’t feeling well and needed to see Spiro. He used a different color cell phone and left with Gloria. Voight says he knows where they went because he wanted to make sure he didn’t lose his precious cocaine inside of Gloria. She agrees to help nail Spiro.

Rita goes with Spiro into the VIP room with Hailey and Bob watching. They can hear that Rita is pushing Spiro too hard and Adam tells her to pull Rita out. She finds her in the bathroom and removes the wire, telling them the deal is still good but to do it again another time.

Hailey asks Adam if he has heard from his dad as he was at the club and its making her nervous; she’s distracted by a baby crying and draws her gun. They find blood everywhere and its clear Rita is dead as Hailey holds her little girl; Adam is furious.

They are looking for witnesses, but so far nothing as its obvious Spiro had a key. Hailey is very angry, feeling they used Rita’s kid as leverage and hopes they are wrong about Adam’s father Bob. Adam feels she is way off base, but she tells him to tell Voight today or she will. She doesn’t care if they are sleeping together as it doesn’t change how she does her job.

Voight understands that he didn’t want to jam his father up for working in a strip club; but he didn’t tell him about the investigation at all. Voight says they are going to follow the facts and to whomever they point to.

When the IU reconnect, Spiro is off the hook for Rita’s murder as he was at the nightclub all night. Burgess is able to track down the van to a Juan Morales, and a man who comes in a baseball cap right around the time of the murder. Antonio says other than his car being there, they have no evidence of him committing the murders; Voight asks Adam if he is sure his dad is really just holding doors because in the photo that is his dad right next to the killer.

Adam finds his dad, demanding to know who Juan is. He says it is a friend of Spiro’s; Adam tells him they are looking at this guy for multiple felonies and his dad is done and these people are truly bad and he needs to get out, before he leaves he tells his dad he loves him.

Adam returns to The Scorpion Club to talk to Spiro, who says he is auditioning some girls. Spiro wants him to enjoy the club, but doesn’t want to do business with preppy rich kids from the North Shore. Adam says he is an ex con and Spiro has him all wrong. Spiro says he is glad they cleared this all up and to make sure to tip the girl.

Later, Spiro arrives with a driver to meet Adam. Hailey watches from afar and tells him that the driver is his father, Bob. Adam insists his dad isn’t dirty. Spiro tells Bob to stay with the car as he is only doing a real estate deal. Kevin says he is with Adam and Voight tells them to go in there and do their thing! Voight isn’t so convinced though as the IU watches from all angles.

Hailey says Morales pulled up with 3 unknowns, and Voight tells them to go in on his signal. Jake (Adam) wants to test the product before they get the money and it is pure. Suddenly they have a problem when Bob goes into the building; Voight tells everyone to HOLD!

Spiro counts the money, tells Morales to put the gun down as Bob is his driver. Spiro asks Bob if he saw anything and when Bob says he didn’t he begins to walk away but he tells Spiro to kiss his ass. Adam begs for them to finish the deal but gun fire erupts and IU rushes in, Adam holds his dad’s wounds as Jay and Hailey take on Morales.

Later, Adam visits his dad at Chicago Med, who says the bullet went right through him and he’ll be home tomorrow. He says he didn’t quit working for Spiro as he is a few weeks away from losing the house after making a few bad investments. He is sorry for screwing everything up. He didn’t know Spiro was doing so many things illegal and he simply wanted to give Adam backup in case things went south because if anything happened to Adam he couldn’t live with himself. Adam wishes he would have came to him for help; but Bob is proud, saying what kind of man takes money from his own kid?

Hailey learns Bob will be okay, then worried about Adam who thanks her for coming in, She takes his hand in the elevator. Back at HQ, Voight talks to Adam who apologizes saying his dad isn’t perfect but he isn’t dirty. Voight says Spiro said Bob didn’t know anything and his dad will be fine, especially since he was working undercover with us to solve murders. Voight reveals he did all the paperwork. He tells Adam that Bob is his father, which makes him family!