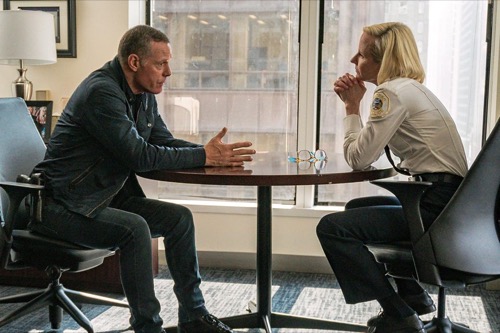 Tonight on NBC their drama Chicago PD returns with an all-new Wednesday, October 31, 2018, season 6 episode 6 called, “True or False,” and we have your Chicago PD recap below. On tonight’s Chicago PD season 6 episode 6 as per the NBC synopsis, “The wife of an alderman is beaten to death, and Voight is under pressure from First Deputy Superintendent Brennan to close the case. To elicit a confession, Upton tells a dark story about her childhood.”

After spending the night together, Hailey and Sean go to get coffee before their shift starts. They hear a call over the radio near them. They head there. A woman standing outside yells to them that there is a woman in a house in distress.

A car pulls out of the driveway and takes off. Sean goes for the car while Hailey goes inside. A woman in there is bleeding on the floor. She dies as Hailey tries to console her. Sean tries to get the car to stop. They get blocked in and put the car in reverse nearly running over Sean.

Back at the station, Voight asks Sean why he and Hailey where together. He says her car is in the shop. Voight tells him if they are having a relationship he needs to know. Sean doesn’t answer, he walks away.

They catch a lead on who owns the car. The man tells them he loaned it to a neighborhood kid he is trying to help out. His name is Devin. They head to his house. His grandmother lets them in. He sees them and runs for it. They grab him outside and bring him into the station. He tells them he was at the park smoking weed, talking to God this morning.

A neighbor near the scene picks Devin out of a line up. Kevin and Voight try to get him to talk but all he wants to do is eat. He insists he didn’t do it and just wants a sandwich.

Hailey tries to get Devin to break by telling him about her abusive father and how they got beat when they were younger just like him. Devin admits he didn’t know the lady was home. He hit her after she hit him. He cries and says he is sorry.

Kevon commends Hailey on her acting skills while Sean is pretty sure she was talking truthfully in the interrogation room. She tells Sean it was all lies.

Evidence comes back and the hair at the crime scene isn’t Devin’s. It belongs to another kid from the neighborhood named Nate. Meanwhile, Jay shows video footage to Hailey of Devin at the park. He wasn’t lying. When she goes to talk to him they find him dead in his cell. He committed suicide.

Hailey shares a drink with Jay later that night. She’s mad at herself for exploiting his weakness. Sean shows up. He makes an excuse that he just wanted to check on her and leaves quickly. Jay suspects something.

They get tipped off and head to a warehouse where they find Nate dead. After some digging, they realize it was the woman’s husband who killed her. She wanted a divorce so he had her killed. They head to track him down.

Hailey tells Jay that IA is looking into her now. They see the suspect and run for him. Hailey chase him down. He turns around and exposes a gun. He wont get down on his knees. Hailey threatens to shoot. Sean comes out of the alley and shoots the suspect.

Voight wants to know why Hailey didn’t shoot. Sean steps in and tells him he had a better shot. At home that night, Sean comforts Hailey after she admits to a dysfunctional childhood.