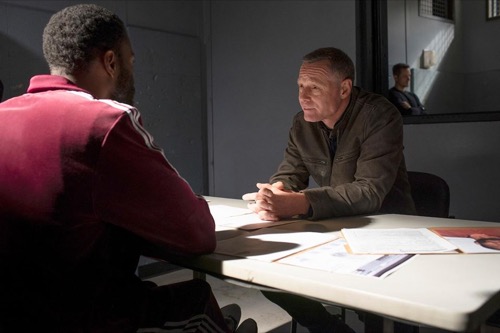 Tonight on NBC their drama Chicago PD returns with an all-new Wednesday, November 14, 2018, season 6 episode 8 called, “Black and Blue,” and we have your Chicago PD recap below. On tonight’s Chicago PD season 6 episode 8 as per the NBC synopsis, “While CPD tries to take down a drug kingpin, Atwater faces a tough choice between doing what’s required to solve the murder of a young dealer and what’s best for the community.”

Chicago PD begins tonight with Jay Halstead (Jesse Lee Soffer) and Hailey Upton (Tracy Spiridakos) drive up an alley to Malik where they want a 100 grams of drugs; they plan to meet at 4 pm, Kevin Atwater (LaRoyce Hawkins) and Adam Rusek (Patrick John Flueger) are sad to see a child doing the dealing. It’s after 5 pm, Hailey and Jay are still waiting, but they get a call about shots fired two blocks away and have to take off. Kevin finds Malik on the ground and yells for them to call for an ambulance, but it’s too late.

Sgt Hank Voight (Jason Beghe) arrive on the scene as Kevin and Adam explain there hasn’t been surveillance in the area for weeks. Voight feels Kenny (Tobias Truvillion) got spooked when the kid asked for more weight and shot him; footage for the construction site up the street reveal it could be Nathan, Kenny’s sidekick. Voight feels he is their only lead and they need to find him fast.

At HQ, Kim Burgess (Marina Squerciati) and Antonio Dawson (Jon Seda) share all the information they have on Nathan with the IU. Jay reveals that Nathan’s mom died and his dad is in prison and his only contact is his Aunt Sarah Washington (Yolanda Ross); Voight wants them to find her. Antonio gets a call from Dr. Applebottom and he wants a refill on his pain meds; refusing to wait the 8 days, saying he needs them tonight.

Kevin and Adam go to see Sarah, saying they are looking for Nathan Watkins; she gives them 5 minutes to look around his room in the back. They find a mattress on the floor and are not surprised that he would end up working for someone like Kenny Armstrong. Across the street they are able to find a pod camera which captures Nathan in a car with a woman driving; when they come to see her, she pulls a gun on them demanding to see their badge. She comes out of the house and Adam handcuffs her as Kevin questions Layla, when they threaten to bring her in for Malik’s murder, Nathan runs out revealing she is there to help him.

In interrogation, Nathan says he would never hurt Malik swearing he doesn’t know who did it. Adam and Kevin press him, saying Kenny believes they were snitching and will try to kill him too. Adam tells him they don’t care about them selling drugs, they only want to know who killed Malik. Meanwhile, Hailey questions Layla who says even her 5-yr-old niece knows Kenny killed Malik. Layla tells them she used to be a thing with Kenny but she grew up and is no longer a gang banger, suggesting even Hailey made mistakes when she was young.

Voight and Kevin tell Layla she is free to go, but Nathan is being charged with heroin distribution but if he agrees to cooperate to help them on the murder case by wearing a wire, they will work with him on the charges. Voight tells her his only job is to catch Malik’s killer so Kevin asks her to introduce him to Kenny and he will plant the wire; she agrees only if they will get Nathan out of Chicago fast. Kevin brings Nathan to a hotel, but he isn’t interested in leaving the state but once he tells him his own brother had to leave to Texas, Nathan talks about a cousin in Atlanta.

Kevin and Layla arrive at a kids’ birthday party, holding hands, she suggests they make it real. Kenny isn’t too pleased to see Layla brought a guy to the party, but Kevin goes inside grabs some peach cobbler and quickly goes to the basement as Antonio and Kim listen while he plants a big in Kenny’s man cave. Outside, Kenny sits with Layla, offering to give her money for her work at the center. He spots Kevin in the basement and tells one of his guys to keep the fools out of there; Layla excuses herself, texting Kevin that there is a camera but too late as two guys find him and don’t accept excuses.

Kenny comes down, saying he just met Kevin and things don’t feel right. His friend has a gun pointed at Kevin as he explains that Layla told him about the ‘96 ball; Layla arrives in time, screaming at the guy to put his gun away and gives Kevin crap for leaving the party to look at the ball. Kenny thinks they are lying but Layla says that his mama told him about the ball and demands they go ask her. Kenny apologizes for the misunderstanding.

Back at the precinct, Kevin thanks Layla for saving his butt. She reveals that Nathan has a grandma in New Orleans as Kevin promises he will do everything in his power to get Nathan out of Chicago. She doesn’t trust a smooth-talking cop, suggesting he take her out for a drink so she can really get to know who he really is. Kevin tells her how he became a cop and even though it’s corny, she finds it honest and likes it.

Antonio takes his meds and Kim catches him, but he covers saying it is aspirin. They watch as Kenny arrives in the basement, they talk about Nathan and if anyone finds him they are to bring him down to the EP; both Kim and Antonio hear it and rush off to get a warrant.

Kevin wakes up, saying he could dig to wake up to Layla’s face. She’s having fun too as Kevin’s phone goes off and he tells her that he has to go. He wants a rain check, suggesting he could come to her place later to finish what they started and she agrees. The IU arrives at the bar with a warrant, telling everyone to move with the hands against the wall, Adam checks the office and behind the grate, he finds a bag of 27 firearms.

Voight tells Kenny that he can bet one of those guns will match ballistics on Malik’s murder, but he swears his name doesn’t ring a bell. Kenny says they can trump up some charges as Voight releases him but tells him not to go too far. Kevin learns from Mark that all the guns are clean but he found a print on one of the guns that were used in a homicide 10 years prior; the print belongs to Layla!

Kevin comes to Layla’s house later that night, he sits with her on the couch seemingly preoccupied. He tells her about the guns found and one of the guns was used to kill a convenience store clerk ten years ago. Layla says she can explain, but Kevin tells her he is a cop so talking to him is evidence. She says she was in the car with Kenny chilling, he was the one who hopped out of the car and she hears the gunshots but she never left the car.

The reason her prints are on the magazine is that he told her to load it and she did; she was only 17 and had no idea he was going to shot the guy. Kevin says regardless of that, she is involved in a felony murder and this is the last thing he wants to be talking about, but he doesn’t have a choice. She wants to know if he is going to arrest her, accusing him that if things get tough he is going to hide behind his badge and wants to know what he is going to do. She has been a good person for the past 9 years, helping young people make good decisions and she is saving lives so why to arrest her for something she did stupid as a kid.

Kevin explains the situation to Voight, who says Layla needs to wear a wire and get Kenny to talk about killing the clerk; it will mean she will have to do time but it is their only way to get Kenny off the street. Voight reminds him that the clerk never got a free pass when he took two bullets in the chest. His family lived 10 years in hell after his death. Kevin also admits he spent the night together with Layla and Voight orders him to walk away from this case, Kevin agrees.

Voight and Adam tell Layla about their plan to wear the wire, but she thinks it is crazy. She feels this is wrong, wanting to know where Kevin is calling him a punk ass bitch. Voight says Atwater has been assigned to another case but she feels Kevin did exactly what he was supposed to do – get her into bed, admit things and now bury her for something she didn’t even do. She feels she saved Kevin’s life and believes she should have told Kenny that Kevin was a cop and let him kill his ass.

Hailey and Jay wire Layla up as Kevin comes to see her. He apologizes, saying it’s not that easy to make this stop and she doesn’t understand, saying he picks and chooses when he is black and when he is blue. She worries that he is going to screw over Nathan too. Kevin arrives at the hotel, telling Nathan his grandma is waiting for him but Nathan says he isn’t going anywhere as Kenny’s boys destroyed his aunt’s place last night; Kevin refuses to fight with him and leaves.

Antonio and Adam talk to Layla one more time before they release her to go see Kenny at the bar. She screams when she gets to the back room and finds Kenny dead in the back room; techs say he has been dead for at least 3 hours. Voight arrives saying homicide is taking over and they can pack up any loose ends as its no longer their problem. Voight tells Kevin to stop as he needs to talk to him but needs to take a call first. He isn’t pleased about the call, telling the person never to ask him for a favor again as they couldn’t help him. He whispers something in Kevin’s ear before he approaches Layla.

Voight informs Layla with Kenny dead, the ASA is not willing to be as lenient with her and she is going to have to serve 3 years for the clerk’s murder, Voight apologizes as Kevin watches her being hauled away in a squad car.

Kevin finds Nathan, who says that Kenny killed Malik for no reason and he did what he had to do. Kevin grabs a rag and tells Nathan to give him the gun. Nathan wants to know if Kevin is going to arrest him but Kevin goes to a bridge with a hood covering his head and gloved hands. He unwraps the gun and throws it into the river below, wiping his tears away.