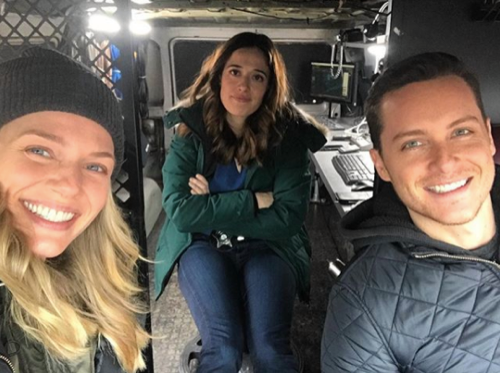 Tonight on NBC their drama Chicago PD returns with an all-new Wednesday, February 28, 2018, season 5 episode 15 called, “Sisterhood,” and we have your Chicago PD recap below. On tonight’s Chicago PD episode as per the NBC synopsis, “Intelligence tracks down a vigilante killing rapists. The investigation hits home for Burgess, who begins to question if the men who attacked her sister truly paid for their actions.”

Atwater’s gun lead went south on tonight’s all-new episode of “Chicago PD” because an old player on the scene had gotten released from prison.

Jorge Pena was a known gang leader and things had been better for everyone when he got sent to prison, but he’s out now and it turns out prison had merely made him worse. He had been out three months and had already been connected to at least six murders so there was no such thing as slowing down. Pena had also decided to change the initiation process for the Three Corner Kings and the squad would later find a victim from someone’s “initiation”. They found the body of a teenage girl in an abandoned warehouse where she had been beaten, raped, and murdered.

The unfortunate victim had hadn’t identification on her and so Burgess decided to use the bracelet she had seen at the scene to identify her because the bracelet had been distinctive. It stood for Village Dance. A youth dance group targeted towards helping at-risk kids and the group even had a website which eventually helped Burgess to identify the girl as Daniella Rios. Rios’s mother had been notified when they identify the girl and she told them that it had been her daughter through the bracelet hadn’t been hers.

The case was brought back memories of when her own sister had been attacked and so she wanted to find the rapists as much as anybody else, but their first lead had come in a little too late. They found a bunch of text messages between gangbangers talking about a rape and how they were looking for the girl that had gotten away. So the team raced to the location of these gangbangers just to find them already dead. Someone had gotten to them first and they had taken their own form of justice.

The rapists had been shot and their genitals removed proving that whoever went after them did so because of their crime. They had raped two girls and so the police thought maybe someone’s male family member killed them, however, Rios didn’t have someone like that in her life and the only person that Vasquez had was her boyfriend. The same boyfriend she swore she didn’t tell because she didn’t want him to look at her differently and so she asked the cops that if they had to talk to him then could they not say anything about the rape. And Burgess agreed to it because she could see that Tina hadn’t wanted anyone to know.

Luckily for Tina, her boyfriend hadn’t known anything about her rape nor did he suspect. He had just been told that Rios had been attacked and that her rapists had been castrated so he asked them if it was like the janitor. This janitor worked at Lakeside High and rumor had it that he raped a girl there before someone found him and killed him just like their other rapists. They even castrated him as well and so the detective questioned the guys that worked the janitor’s case. His name had been Mark Whitmore and he had had a record.

The guy had sexually assaulted women before and somehow he got a job at a high school where it was rumored he raped again. The detectives couldn’t corroborate whether or not the rumors were true and so all they had to go on was that they were looking for a vigilante. The vigilante was out on the streets hunting rapists and Burgess was letting her bias color this case because she wasn’t sure if they should even be looking for this person. She said she wished her sister had someone like that in her life and she also refused to call the new victims, victims.

They were rapists to her and so Voight had a word with her. He told her more or less that he understood where she was coming from and told her that they were still looking for a murderer. They had gotten their first lead on the person they were looking for when the detective that worked Whitmore’s case told them that Whitmore had been harassed by a gangbanger called “Q” before he died. So the cops went looking for this “Q” and they found it wasn’t a man – it was a woman. “Q” was part of an all-female gang and she was a tough one.

They brought her in and questioned her yet she refused to tell them anything and so they tried to go after her crew. Her crew was supposed to be a drugs drop and so the detectives followed them to the high school where the drugs were handed over to Vasquez. Vasquez was later brought in for the drug deal and the detectives conveniently forgot to tell her that she hadn’t been delivering drugs. It had been a test and so the “drugs” had been baking powder and some vitamins. And because Vasquez hadn’t known that, they got her to flip.

The teenager admitted that when she went home after the rape she had called her cousin. She said she had been scared that those guys would kill her too and so her cousin put her in touch with someone that could help – “Q”. “Q” therefore took care of the matter in exchange for Vasquez agreeing to pick up some drugs for her and so the teenager agreed to wear a wire for the police because she hadn’t wanted to go to jail for what she still believed was drugs. So she wore the wire and she met “Q” like a promise.

“Q” asked all the necessary questions and she had been proud when Vasquez said she had shaken off the cops, but they got to talking and the cops got what they needed. They had “Q” confessing to the murder of two rapists and she said she did it because the same thing had happened to her. She had been raped when she was fourteen and so she had done what she did for Vasquez because she knew that the teenager was never going to sleep safely again until what she feared had been removed.

“Q” wasn’t even angry. She was proud of what she did and so she told the police she would agree to it if they left the rest of her girls alone. However, Burgess thought she could flip “Q” to get to Pena. Pena was the one that came up with the new initiation and so “Q” had no problem with taking him down though when it came to the day – “Q” got someone to meet her and give her a gun. Burgess saw the exchange and she had called it in except she said she didn’t see what was being handed to “Q” when she did. She saw “Q” get a gun and knew that “Q” was going to murder Pena. She just didn’t stop it.

Burgess allowed for Pena to be murdered and later she asked “Q” why so “Q” told her he was the one that raped her.