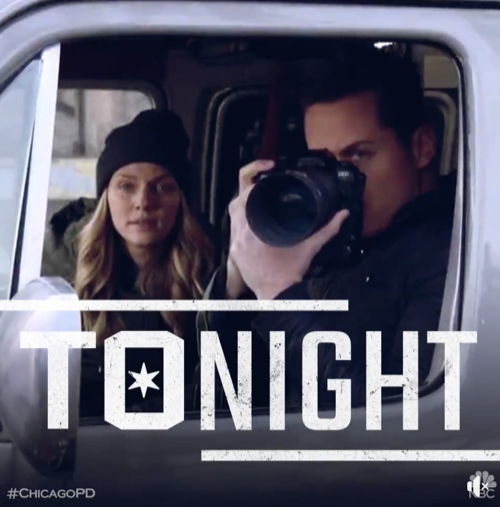 Tonight on NBC their drama Chicago PD returns with an all-new Wednesday, March 21, 2018, season 5 episode 18 called, “Ghosts,” and we have your Chicago PD recap below. On tonight’s Chicago PD episode as per the NBC synopsis, “Upton brings back an old undercover identity to help take down a meth ring spearheaded by a former criminal contact. And with pressure from Woods mounting, Voight calls in a favor for Olinksy.”

Antonio’s underwork with the Latin Players was put at risk on tonight’s all new episode of “Chicago PD” when an old player came back on the drug scene.

Antonio had infiltrated the Latin Players and had been trusted enough to pick up a shipment. The “shipment” was liquid meth and the Latin Players were going to turn into crystal before selling it, but they hadn’t sent Antonio out on his own. He had gone with the man named Perez to pick up this shipment and Perez had gotten jumpy when they heard gunshots at the meet. He thought they shouldn’t risk their lives for the shipment and had driven them off before Antonio could find out what was going on so the others had to move in. Voight and his team had checked the area and they had found the aftermath of a gunfight. The shipment had gotten stolen and the supplier had gotten killed in the fight.

Though there had been another casualty because one of the guys that had taken out the supplier had also gotten hit and it turns out he was a familiar face to Upton. Upton knew Scott Jansen from her undercover days and so she knew who he working for. He was working for Booth when he stole the shipment and Booth was someone from Upton’s past that she hoped would stay there. She was undercover for a while and had a good cover only something happened. Upton hadn’t wanted to tell anyone what exactly happened back then and so she pretended she wanted back in because she just wanted to correct a wrong. She said that Booth had gotten put away without her testimony which meant he didn’t she was with the police and she also said Booth should never have gotten out.

Booth had gotten put away from several years and had gotten out early on good behavior that Upton swore he hadn’t deserved. It also wasn’t a coincidence that he got out and two months later someone is stealing liquid meth, so Upton wanted to go back in and Voight eventually signed off on it. He had go back in as Kelly who was a former user and she failed to mention several things. She told them that her boyfriend was someone that was willing to flip and that he had disappeared without a trace one day just she hadn’t said what happened before he disappeared. Garrett and Upton had gotten very close to the point where their relationship didn’t seem like it was part of her cover anymore and so Halstead had been thrown when he saw a picture of them together.

Upton had been unpacking and strategically placing pictures around her new apartment when Halstead saw a picture of her with Garrett on the fridge. It had looked like they were truly embracing each other and so he asked Upton about it. She said it had merely been part of her cover and that had been that. Upton hadn’t wanted to discuss the past too much because she hadn’t wanted to explain herself and so Halstead didn’t begin to see holes in her cover when she reintroduce herself as Kelly to Booth. Booth had gotten Scotty’s funeral and he had seen his old friend Kelly there who explained she just wanted to pay her respects. Except Booth didn’t think he would see Kelly again after what happened at New Year’s.

Upton had shut that conversation as quickly as it was brought up and had told Booth that things were crazy back then because they had all been pretty messed up. She instead wanted to talk about Booth and whether or not he was back in the business. He claimed that he was in the paint business and had gotten upset with “Kelly” when she tried to pitch him a distributor. Booth said he was in the paint business and had walked away although no one knew why he had walked away because he was going to need a someone to sell his product and so they followed the hunch. They believed that Perez might have double-crossed the Latin Players because he could be making more money with Booth and their theory panned out when they learned that Perez had been visiting Booth’s warehouse in the weeks leading to the “theft”.

Perez was also a good pick. He had many connections that he made through the Latin Players and so it made sense for Booth to reach out to him however Antonio knew how to get rid of him. He staged a shooting that made it appear like someone wanted to kill Perez and that got Perez to leave town. Then with him gone, Booth did seek out Kelly again and he had asked her about her friend from Iowa. Iowa was where she claimed she was from and she said she connections that man like Booth could use, so he told her he’d check things out and get back to her when really he wanted to follow her. Booth had been obsessed with Upton and Halstead didn’t find that out until he talked to her old boss when she was undercover.

The secret that she had been trying to hide had been attempted rape. Booth had tried to rape her and had started beating on her when she fought back, but Garrett had been there. He pulled Booth off her and took her to the hospital. So when Halstead learned about this, he had wanted to pull to put an end to her cover. He thought it was too dangerous and Upton disagreed. She wanted to stay and finish what she started because she was pretty sure Booth killed Garrett and that he killed her boyfriend because of her. That’s why she kept holding information back and why she felt she had to follow through on the job she started years ago. Halstead hadn’t liked only he allowed it to continue until he finally met with Booth.

Booth had asked him the usual questions he was suspecting and then Booth has asked him about Kelly because he wanted to know if “Ryan” slept with Kelly. That’s when Halstead finally had enough. He talked it over with Voight and they both wanted to pull the plug on the whole opp yet Upton refused to finish and eventually convinced Halstead to give her one more chance to get Booth. Booth was going to come with the drugs to drop off and once they caught him in the act then it was going to be all over, so Halstead agreed to the plan. He meet with Booth and Kelly and everything was going like they planned when suddenly Booth wanted to check Kelly for wires. He put her up against the car and was practically assaulting her in front of Halstead and so he moved for his gun.

Which caused Booth’s nephew to reach for his gun and then suddenly everyone was shooting. Ty had gotten hit and Halstead had stayed with him while Upton went after Booth. Booth had tried to make a run for it and Upton had later taken great pleasure into beating him senseless until she ultimately arrested him for his crimes.

And when she later asked him where was Garrett, Booth told her that she would never find him.