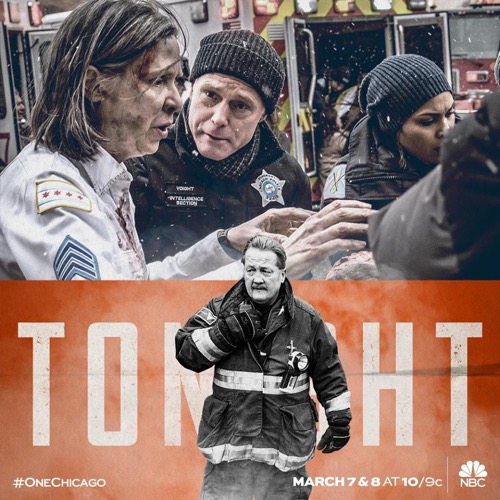 Tonight on NBC their drama Chicago PD returns with an all-new Wednesday, February 28, 2018, season 5 episode 16 called, “Profiles,” and we have your Chicago PD recap below. On tonight’s Chicago PD episode as per the NBC synopsis, “Intelligence investigates a string of bombings targeting members of the media. Racing against a ticking clock, the team enlists Firehouse 51 to help examine the devices and prevent the next attack.”

Antonio looks distracted, he is heading into the station. His daughter is hanging with Gabby, Antonio tells her that she is grounded because of a picture that of her drinking that she posted under a fake name so he couldn’t monitor it. Eva tries to explain that everyone has two profiles and the internet just makes things look worse than they are.

Eva admits she went to her friend’s house and took the photos but nothing happened. Antonio won’t believe her, he confiscates her phone and says they are going home. In the station, they are watching the news on the TV when a bomb goes off at the TV station. Sargent Hank Voight is fist on the scene, he talks to Mendez and asks if a command post has been set up yet; gives him instructions on how to block off the surrounding area. Meanwhile, inside the TV station, there are to women alive, Sheri’s face is badly burned, Trudy tries to drag her out and give her oxygen.

The two women are rescued, Sheri is being brought to the hospital by ambulance. Trudy tells Voight that it was a bomb that went off. Inside the ambulance, Antonio is with Sheri who tells him that it was a bomb that was in a package. Sheri goes into cardiac arrest, blood is pouring out of her neck. The initial report shows that it was, in fact, a bomb in a cardboard box in Sheri’s office. Sheri and Betty didn’t make it, dozens did. Sheri received death threats, but they can’t be traced. There is a photo of a guy who was outside the building. The security desk at the station has a sign in desk, the guy who delivered the package to Sheri signed his name, Eric Mitchell. Antonio looks for Eric Mitchell, he finds him as he comes out of his house to check his mail and a bomb goes off and blows his head off.

Voight thinks this is not an isolated incident, he thinks the bomber has an agenda. They know that Eric Mitchell worked in media for 15 years, entertainment magazine and journalist, but there were no death threats against him. Trudy is back at work, she wants to work and Voight is ok with it. Voight tells everyone that there is a connection between the victims and media. It turns out that the bombs were different, but they were made by the same person and with military-grade C4. You can’t buy that kind of C4 on the market and the military keeps strict records. Unfortunately, there is no evidence that Eric and Sheri never really knew each other.

Meanwhile, the photo of the guy who was standing outside the building when the first blast went off was identified, his name is Mark, he worked security at the news station and he is army, did a tour in Iraq. It’s easy to track Markdown, they drag him from his home. Voight interrogates him, Mark says he was dropping the station to get a form filled out. Mark went to school with Eric and Sheri, Mark asks for a lawyer.

Voight is upset, Mark isn’t talking and they don’t have enough to charge. Jay thinks they are questioning the wrong man and because he served his country, he thinks they should give him the benefit of the doubt.

Next is to question one of Mark’s friends, he claims that Mark actually protected Sheri when some guy confronter her that was all jacked up because she wrote on some gossip blog and Mark forced him from the building, he was white and had a beard. Trudy takes a packing slip out of a box that was delivered to the station and notices a message on it that reads “Once again an innocent man blows up by the engine of fake news. The CPD, further perpetrators of the fake news engine will burn.”

Trudy tells Burgess and everyone else not to key their radios or use their phones, they have to evacuate. The bomb is diffused, but Trudy doesn’t believe it is the same guy. It is the same material as the other two bombs, but it can’t be traced. Trudy found out that Sheri did run a blog, it was called Chicago Scoop. Jay wants them to release Mark, he is clearly not happy that they are still holding him.

Alvin has narrowed down a lead of a guy who was dealing the C4. More info about Eric, he ran a story about a guy named Larry Sheppard who worked for the station but was fired 2 years ago, he was reporting on a murder and rumors started that he was in some way, he had murdered the woman. It was a PR nightmare, they fired Larry based on fake news.

The search is on for Larry, they head to his home and find a room that is filled with creepy photos of Sheri but no Larry. It turns out that Larry was prepared for this, he hasn’t used his cell phone in three months, not a single credit card, he wiped his social media accounts, bank accounts, email; this guy is living in the dark.

It turns out Larry didn’t kill anyone before the bombings, Sheri ruined Larry’s life with one tweet. It turns out a guy named George Lehr is the person who bought the C4, Voight announces that they should release Mark. Eva is packing, she tells Antonio that she wants to leave because he wouldn’t listen to her – she went to that party because she didn’t want her friend to drive drunk. He tells her she is right, he should have let her explain – he gives her back her cell phone.

Back at home, someone threw bricks at Mark’s windows. It turns out that George had some heart episodes and was treated by paramedics in the past little while, Voight now needs help from Chicago Fire to get access to George’s house, and his laptop.