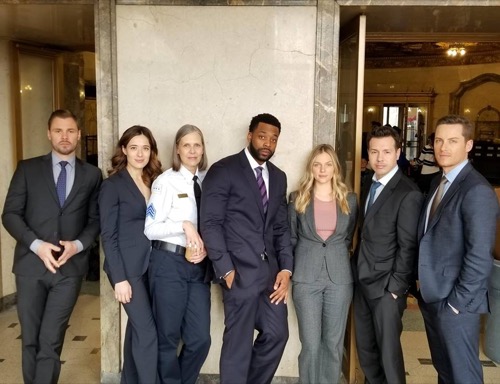 Tonight on NBC their drama Chicago PD returns with an all-new Wednesday, May 2, 2018, season 5 episode 21 called, “Allegiance,” and we have your Chicago PD recap below. On tonight’s Chicago PD season 5 episode 21 as per the NBC synopsis, “Halstead and Atwater go undercover to prevent military grade weapons from hitting the street. Meanwhile, Voight calls in a favor as a last-ditch effort to clear Olinsky’s name for Bingham’s murder.”

Halstead and Atwater go undercover to prevent military-grade weapons from hitting the street, but it doesn’t go as planned. Voight wants to keep it alive, make the gun deal happen and get the N4’s off the street, Bad news for Alvin, the grand jury decided to indict, he is under arrest, has to give up his badge and his gun.

Voight is back at the station, he wants an update on the M4’s; turns out Halstead confirmed Dexter did not have the M4’s in his possession, they were supposed to be dropped off the day before but his connection in Indiana got hung out – they will be dropped off today. Voight tells Kevin to get this deal back on track.

Jay and Kevin work to get the deal back on track but Nate, one of the guys who was selling the guns has been murdered. Jay calls Kevin and finds out that Nate showed up dead. Wes, who was buying the guns, is furious, he thinks one of his guys did it.

At the station, Antonio wants to get a search warrant and go after the guy who Wes thinks murdered Nate. Voight wants to hold out, he is afraid it might blow their cover.

Alvin is in jail and within minutes a guy threatens him and his wife, Alvin grabs through the bars and tries to choke the guy, a guard comes and stops it.

Dexter made a new demand, he wants to even things out and Sebastian has to do it, he has to kill his little brother.

Meredith tries to plead with Alvin, to tell the truth, and save himself, she tells him that she loves him. Alvin tells her that he is going to beat this the only way he knows how. Voight tries to visit Alvin and is refused because visiting hours are over. Voight bumps into Meredith who is on her way out and she tells him that it should be him in there and not Alvin.

At the station, Kevin tells Voight that Wes wants Sebastian to kill his little brother; Voight doesn’t care, he says that one gang banger is worth taking those guns off the street, it’s business as usual.

Kevin and Jay go see Sebastian and just as they arrive there gunshots go off, Kevin runs to him and Sebastian tells him that Wes shot him because he couldn’t kill his little brother.

Wes and Sebastian’s little brother go to do the buy; his brother gets a text and finds out that his brother was shot and he looks at Wes. Dexter is smirking, all of a sudden there is a commotion and the PD move in. Guns go odd, a blue van drives in and then tries to bypass and leave but they manage to stop it – the van is full of guns.

Kevin tells Sebastian’s little brother that it is his fault that his brother is dead because he wouldn’t tell the truth about Dexter’s guy.

In court, Alvin does not get granted bail and Voight is upset that he has to stay in jail until trial. At the station, everyone wants to know if Alvin is going to get out, Voight says he will be out soon and cannot discuss the details. Antonio wants answers and Voight tells him to back off they almost get into a fight. Voight goes to his office and pours himself a drink. In prison, Alvin is hanging in there.

Voight is ready to confess everything to get Alvin out of prison, meanwhile, in prison, Alvin is attacked and stabbed.