BY Dorothy Gale on May 14, 2018 | Comments: Leave Comments
Related : Dancing With the stars, Recap, Television, TV 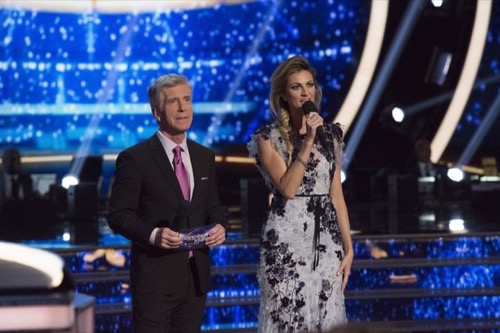 Tonight on ABC the glitz and the glimmer returns to the ballroom as Dancing With The Stars Athletes season 26 episode 3 semi finals airs! We have your all-new Monday, May 14, 2018, season 26 Week 3 “Semi-Finals” Dancing With The Stars recap below! On tonight’s DWTS Season 26 episode 3 as per the ABC synopsis, “The six remaining athletes are ramping up their spring dance training as they ready themselves for another double-header.  Season 24 runner-up David Ross returns to the ballroom as a guest judge, alongside Len Goodman, Bruno Tonioli, and Carrie Ann Inaba.  In round one, each couple will perform an individual dance inspired by the MVP in each athlete’s life. Each couple will perform a foxtrot, Viennese waltz, quickstep, rumba or contemporary routine. Then in round two of the evening, the athletes will lace up for a Ballroom Battle dance-off with three toe-to-toe performances.”

Make sure to bookmark this spot and come back from 8 PM – 11 PM ET for our Dancing With The Stars recap. While you wait for our recap make sure to head over and check out all our DWTS recap, spoilers, news & videos, right here!

Judges Comments: David: “Let me tell you something, you are a boss, that was impressive. I loved the Quickstep, your mom’s love empowered you and it showed tonight.” Len: “You didn’t mess about, you came out all guns blazing, full on. You slightly lost your posture, however, well done.” Bruno: “It was like watching a firefly flying in full flight, you did some fantastic runs, perfect timing. I hope you make it, you lost a little bit of your top line.” Carrie Ann: “You were fantastic, you are in your zone. Bruno is right though if you are here next week yo have to have your AA game. It was fantastic.” Judges Scores: Carrie Ann: 9, David: 9, Len: 8, Bruno: 9 = Total 35/40

Judges Comments: Len: “I liked the soft sweeping movement. It had ease and an elegance, I would have preferred a little more fluidity in the arms, there were one or two unstable moments. In the hold, you were great, well done.” Bruno: “The good thing is I noticed that you are now trusting your partner. You have to be careful when guiding your arms, there is a balance problem.” Carrie Ann: “I love that you do embody what this show is about, I love the joy and it draws us all into it. I wish we had more weeks because I want to see so much more from you.” David: “You remind me so much of my journey on this show, the way you have the support of your family and it’s tough coming out of your comfort zone.” Judges Scores: Carrie Ann; 7, David: 8, Len: 7, Bruno: 7 = Total 29/40.

Chris Mazdzer and Witney Carson dancing the Foxtrot to “I Got Rhythm” by Ray Chew Live.

Judges Comments: Bruno: “I think I have been razzle-dazzled by the Fox Trot. You were so dashing, there were elements of Gene Kelly, it wasn’t perfect but as a tribute, it was outstanding, brilliant.” Carrie Ann: “It was a showstopper, well done, you were not comfortable in the beginning but once you opened up it was balls to the wall. There was a lift and they are not allowed.” David: “Great catch, I loved that you stayed in character, loved the hat, great job.” Len: “I don’t want to upset mom because I loved all moms, I thought it was brave. The whole thing was full of entertainment.” Judges Scores: Carrie Ann: 8, David: 9, Len: 7, Bruno: 9 = Total 33/40

Tonya Harding and Sasha Farber dancing the Rumba to “See You Again” by Tyler Ward.

Judges Comments: Carrie Ann: “You danced with your heart open, there was an authenticity to your dance. Well done.” David: “People don’t know how hard it is to watch that type of package, it was very inspiring, I am proud of you, that was awesome.” Len: “It was awesome, there was speed, a little soft and into the dance. You could have used a little more hip action, but well done.” Bruno: “Very nice, your lines are getting better, you are keeping your shoulders down, good balance, well done.” Judges Scores: Carrie Ann: 8, David: 9, Len: 8, Bruno: 8 = Total 33/40

Judges Comments: David: “That was beautiful, great moves at the beginning, so impressive, by far my favorite dance of the night.” Len: “It had great control, mixed with flair, it was a bit stop-start on occasion, I only say what I say – it was the best dance so far tonight.” Bruno: “You were like two birds of paradise, mesmerizing and enchanting, I loved how in-tuned you were. This was a masterpiece of a dance.” Carrie Ann: “That was very challenging, you are so talented, it was amazing and I want to thank you – pure perfection.” Judges Scores: Carrie Ann:10, David: 10, Len: 9, Bruno: 10 = Total 39/40

Josh Norman and Sharna Burgess dancing Contemporary to “Stand By Me” by Bootstraps.

Judges Comments: Len: “I was concerned, but I thought the lifts were seamless, the entrance and exit, I liked it so much, well done.” Bruno: “Strong, assured, confident, what you did is took such good care of Sharna. The dismount was great, it was all seamless, musical and well done.” Carrie Ann: “I absolutely agree with Len, I had peace watching it. You did every movement with love and care for Sharna.” David: “One word, smooth, that was beautiful. Nice job.” Judges Scores: Carrie Ann: 9, David: 9, Len: 9, Bruno: 9 = Total 36/40

Judges Comments: Len: “This was difficult, you were giving it your all, you need a bit more rhythm but good job overall.” Bruno: “It was the right feel, you did your best. There were timing issues, but well done.” Carrie Ann: “You were all fantastic, it was a great battle, this is hard but you both did great.” David: “This is my last thing to do, but great job.” Judges Winners: Tonya & Sasha win the addition 2 points.

Judges Comments: Bruno: “What can I say, wow guys. You gave it everything you had, full on, the quality was extraordinary. I can’t say one was better than the other one because you both were excellent.” Carrie Ann: “That was a showdown, a doubleheader, there was so much going on, I would have paid top dollar to see that over and over again.” David: “Very impressive, that was amazing, kudos to both you guys.” Len: “I really loved both of you. This is a tough decision.” Judges Winners: It is a tie, America gets to break it. The winner is Adam & Jenna, they win the additional 2 points.

Judges Comments: Carrie Ann: “Once again so tight, two different approaches, both were great, so good.” David: “You guys were bringing the heat, a great way to end the show.” Len: “This has been difficult, I’m not a lover of the shirts off though, great job both of you.” Bruno: “I don’t think I ever watched your feet, you got the message.” Judges Winners: Josh & Sharna win the additional 2 points because David raised the wrong paddle.

Time for some results, the first couple who is dancing in the finale is Adam Rippon and Jenna Johnson.

Tanya Harding and Sasha Farber are also dancing in the finale.

The third couple dancing in the finale is Josh Norman and Sharna Burgess.