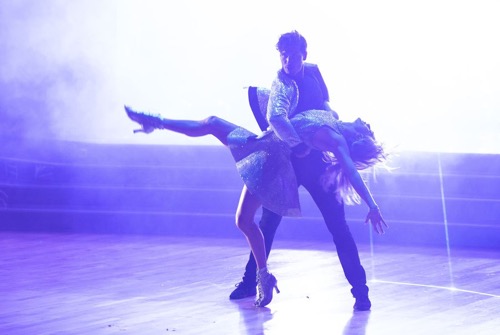 Judges Comments: Len: “How long did it take you to master that footwork? You nailed that fantastically. The hold was pretty good, you were great last week, better tonight.” Bruno: “I cannot believe it DeMarcus, week two and you like you danced all your life. You make it look like a stroll in the park, come on, that was great. You have musicality and if you kick any higher you are going to join the Rockettes.” Carrie Ann: “It was impressive, you have style and sass with sophistication.” Judges Scores: Carrie Ann 8, Len 8, Bruno 8 = 24/30

Judges Comments: Carrie Ann: “What I notice mostly was the radiance and confidence that came out of you, as soon as you started walking on your own it was like you enlarged, your soul came out of the body. You are counting with your mouth, try to do it with your body. Amazing job.” Len: “Arden, great work, great Cha Cha. There was a little mistake early on, but it was a very competent performance.” Bruno: “A lot of people would fall apart when they make a mistake and you didn’t, that is the way to do it.” Judges Scores: Carrie Ann 6, Len 6, Bruno 6 = 18/30

Judges Comments: ” Carrie Ann: “It was fantastic, it was so polished and professional and everything about it made me feel like I was watching a show on Broadway. You were so clean, those kicks were so high, you have great showmanship.” Len: “I must say that you are on the right track. It was a great improvement from last week. I would have liked to see a little more Charleston going on in there. As a number and a performance, it was terrific, well done.” Bruno: “That was a Grand Central spectacular mini-musical. That was a first-class ride.” Judges Scores: Carrie Ann 8, Len 7, Bruno 8 = 23/30

Judges Comments: Len: “That was a more relaxed performance, you looked confident. There was a little mistake, however, nice and well done.” Bruno: “My kind of girl with a good attitude. I liked it, you went slightly wrong, but you didn’t let it stop the flow of the performance, well done.” Carrie Ann: “I thought you started a bit tentative, but you opened up. It is hard to dance on a fractured foot, I thought you did great.” Judges Scores: Carrie Ann: 7, Len 7, Bruno 7 = 21/30

Judges Comments: Bruno: “You were prima Argentina. That music is not easy, because the timing is so tricky. You threw in a very hard lift, you did a very good job.” Carrie Ann: “The lift and the wardrobe not so great. Everything else, stunning. The incredible energy you had was great.” Len: “When you started with that ballet stuff, I thought here we go. But I’ve got to say it was a great mix of precision and passion. It was without a doubt it was the best dance so far this season.” Judges Scores: Carrie Ann: 8, Len 9, Bruno 8 = 25/30

Judges Comments: Carrie Ann: “I recognize that this is so challenging for you, you are the only contestant that has no performance experience in front of an audience whatsoever. But tonight, I saw a transformation from last week to this week. You told us a story, you had elegance and it was a beautiful lift. Much improved.” Len: “How refreshing, you went straight into the dance, you were like a butterfly.” Bruno: “You are so loveable and endearing, you moved and you had good lines. You need to have a confidence in going all the way and I can help you if you want.” Judges Scores: Carrie Ann: 5 Len 6, Bruno 6 = 17/30

Judges Comments: Len: “The lifts were spectacular. You can’t go far to far away from the heart of the dance. As great a dancer as you are and I do think you are terrific, it only had a little bit of Argentine Tango flavor. The passion was lacking but it doesn’t stop me from saying that you were fantastic.” Bruno: “It was futuristic, fantastic. It was like watching Barbella landing in the coolest and hippest New York club and giving an Argentine Tango that Lady Gaga herself would die for.” Carrie Ann: “That was a very different type of Argentine Tango, what I liked about it is that it was so graphic, every picture that you hit, you nailed it. It was so sharp and strong and it still had the passion.” Judges Scores: Carrie Ann 9, Len 8, Bruno 9 = 26/30

Judges Comments: Bruno: “That was exhilarating. It was so bright and bursting with excitement, it was like New York itself. Last week I made a comment about your legs, tonight you had a control, so strong yet light.” Carrie Ann: “What is going on? Week 2, that was ridiculously good. You were fabulous, you blew us out of the water and it will be a performance that we remember forever.” Len: “There was so much energy from you too. The cast this year is great, well done.” Judges Scores: Carrie Ann: 9, Len 8, Bruno 9 = 26/30

Judges Comments: Carrie Ann: “This song is an anthem for women of our age. What I saw tonight was something very special. Halfway through the number something opened up in you. I saw you trust yourself and that is what this journey is about. You filled the space tonight and it was beautiful.” Len: “It was just a lovely performance, a lovely waltz, very well done.” Bruno: “Definitely beautiful, you let yourself go and embraced the music and the moment. Don’t lose your neck though.” Judges Scores: Carrie Ann 8, Len 7, Bruno 7 = 22/30

Judges Comments: Len: “It was a joyful performance full of energy, a fleet of foot, you have to work on your frame. You need a bit more finesse.” Bruno: “This was a smash hit of 40 seconds. You looked like Broadway headliners, I loved the jump at the end it was full on Gene Kelly.” Carrie Ann: “There something so charming and old-school about this performance. It was really good.” Judges Scores: Carrie Ann 9, Len 8, Bruno 9 = 26/30

Judges Comments: Bruno: “There is a little devil inside that is coming out and I like it a lot. You can move, you did it.” Carrie Ann: “Watch out ladies, Evanna is coming for you. The inner core strength, everything was open and fierce.” Len: “You must have a little Harry Potter magic going on because this was a proper Samba. I thought it was terrific, this is the way to go.” Judges Scores: Carrie Ann: 8, Len 8, Bruno 8 = 24/30

Judges Comments: Carrie Ann: “That was not really Foxtrot at the end but you are still authentically joyous when you perform.” Len: “It was full of youthful exuberance, not the most elegant Fox Trot that I have ever seen, but you sell it, well done.” Bruno: “It was so brilliantly bonkers, you can’t help yourself but have fun.” Judges Scores: Carrie Ann 7, Len 6, Bruno 7 = 20/30