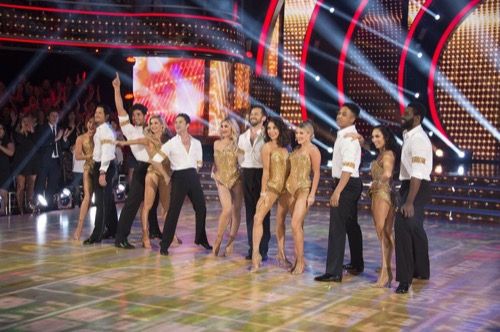 Tonight on ABC the glitz and the glimmer returns to the ballroom as Dancing With The Stars season 27 week 3 airs! We have your all-new Monday, October 8, 2018, season 27 week 3 “Most Memorable Night” Dancing With The Stars recap below! On tonight’s DWTS Season 27 week 3 as per the ABC synopsis, “The 11 remaining celebrities stroll down memory lane and celebrate through dance a time in their lives that left a lasting impression, as Most Memorable Night comes to “Dancing with the Stars.

An elimination occurs following Week 3 of the competition, featuring songs from memorable years for the stars. Included: a performance by Leona Lewis.”

Mary Lou Retton and Sasha Farber – Viennese Waltz – “We are the Champions” by Ray Chew Live. Mary Lou chooses 1984 as her most memorable year when she won the gold medal.

Judges Comments: Len: “You show the athletes fighting spirit. You came out with so much determination, I love your hands – you even use your thumbs. It was a lovely performance.” Bruno: “Nothing can keep Mary Lou down. I love that, I love the determination. You worked on your shoulders, I really could see it.” Carrie Ann: “I’m surprised, I was so uplifted by your spirit. You were a little out of sorts, but you pulled it back together.” Judges Scores: Carrie Ann 8, Len 8, Bruno 8 = 24/30

Milo Manheim and Witney Carson – Jive – “Can You Do This” by Aloe Blacc. Milo chooses this year, 2018, as his most memorable year, his movie came out, he is on DWTS and he is graduating from college.

Judges Comments: Bruno: “Graduated with honors! You have such strength, that was fantastic.” Carrie Ann: “You are so young but your light is shining so brightly everywhere. You are really clean, clear and energetic. Just watch the zombie arm.” Len: “I saw a whole different side of you, great content, that was a terrific jive,” Judges Scores: Carrie Ann 9, Len 9, Bruno 9 = 27/30

Nancy McKeon and Val Chmerkovskiy – Rumba – “Love Someone” by Lukas Graham. Nancy’s most memorable year was 2006, the year her family was complete.

Judges Comments: Carrie Ann: “Every time I watch you there is this joy that comes out of you and I haven’t been able to put my finger on it. It’s a love base joy, you sustained every movement. It was beautiful.” Len: “I agree 100%, the only thing that is important in this world is family. You needed a little more hip action going on there.” Bruno: “You really portrayed this dance with such warmth and tenderness. Your turns are much improved, your neckline has transformed. You need to put better hip action. It was a great performance.” Judges Scores: Carrie Ann 8, Len 7, Bruno 7 = 22/30

Alexis Ren and Alan Bersten – Contemporary – “How to Save a Life” by Ray Chew Live. Alexis’ most memorable year was 2014 when her mother died of cancer.

Judges Comments: Len: “Your dancing never ever disappoints me, always a real solid performance. The musicality and fluidity were great, loved the lifts. A little bit too sharp, but good job, well done.” Bruno: “I’ve been there, trust me that she will always be there with you. You danced like an angel, true feeling, deep emotion. I loved it.” Carrie Ann: “The legacy of a loved one that we lose is created by how those who continue on without her live and dance. You gave us a wonderful gift, a poetic, elegant legacy of your mother.” Judges Scores: Carrie Ann 9, Len 8, Bruno 9 = 26/30

Evanna Lynch and Keo Motsepe – Viennese Waltz – “Hedwig’s Theme” by John Williams. Evanna’s most memorable year was 2006 when she booked the role in Harry Potter.

Judges Comments: Bruno: “Your magic is stronger than ever. We are all under your spell. You were going so fast. I liked how you were so determined and so self-assured, you put so many wonderful nuances into your performance. You are gorgeous.” Carrie Ann: “Your performance has grown so much from the small beginning, very tight moves, you drew us in so deeply and then you gave us so many dimensions of that dance. You gave us the gliding and then the power and then you gave us demure. It was such a beautiful well-rounded performance.” Len: “It was powerful, it was full of gusto but you maintained the elegance of the Viennese Waltz. That was a magic performance.” Judges Scores: Carrie Ann 9, Len 9, Bruno 9 = 27/30

Joe “Grocery Store Joe” Amabile and Jenna Johnson – Viennese Waltz – “You are the Reason” featuring a live performance by Calum Scott and Leona Lewis. Joe’s most memorable year is this year when he met Kendall.

Judges Comments: Carrie Ann: “It is so hard to judge you. Tonight I saw so much more opening and I really saw you trying and it touched my heart. I do have to say, you didn’t miss any beat, but you are still growing. Keep doing what you did this week, it is going to pay off.” Len: “Your dancing is a work in progress and you haven’t got there yet but I can see a more confident Joe coming out. You are really going for it, I would have liked to have seen more Vienesse Waltz come out.” Bruno: “This got you moving, now you have to work on the quality of movement.” Judges Scores: Carrie Ann 6, Len 6, Bruno 6 = 18/30

Juan Pablo Di Pace and Cheryl Burke – Samba – “Ni Tu Ni Yo” by Jennifer Lopez featuring Gente de Zona. Juan’s most memorable year was 1999, the year when he moved away from his family to chase his dream of being an entertainer.

Judges Comments: Len: “Sometimes a dance is only words (Len gets up and claps).” Bruno: “Give me a second, I am still basking in the afterglow. Twenty-seven seasons I have been on this show and this is one of the best Sambas that I have ever seen.” Carrie Ann: “My three favorite male performers are Emmet Smith, Gilles Marini and Mario Lopez, you are the son of all three of them together, that was off the charts.” Judges Scores: Carrie Ann 10, Len 10, Bruno 10 = 30/30

John Schneider and Emma Slater – Waltz – “Smile” by Ray Chew Live. John’s most memorable year was 2016 when he lost everything in a flood and he became closer to Alicia, his partner.

Judges Comments: Bruno: “It was so charming and so heartfelt, it was impossible to resist. You showed every emotion, your heart was into it. You had such a wonderful caring touch, a true gentleman. Be careful in hold though because sometimes you are unsteady.” Carrie Ann: “It was such a beautiful extension, I was so touched. You laid it all out there but I did see your posture, I think your emotions took you away a little.” Len: “I liked the sentiment of the whole thing and you had an elegance about you, it was tricky music to dance the Waltz to. If you are going to shine, you need to polish a little bit.” Judges Scores: Carrie Ann 7, Len 7, Bruno 7 = 21/30

Bobby Bones and Sharna Burgess – Contemporary – “A Million Dreams” from “The Greatest Showman.” Bobby’s most memorable year was 1998 when he had graduated from high school because nobody had done that before in his family.

Judges Comments: Carrie Ann: “Every time on this show we are able to see real moments, an authentic magic that blows us away. I can’t even say what it was about that routine that was magic but we all experienced it. This is what I love about art and dance, I hope it takes you miles ahead.” Len: “It was the whole thing, the little guy singing. This was your best dance, that is all I can say.” Bruno: “Honest, real, fantastic dance, the storytelling was amazing.” Judges Scores: Carrie Ann 8, Len 7, Bruno 8 = 23/30

Tinashe and Brandon Armstrong – Rumba – “2 On” by Tinashe. Tinashe’s most memorable year was 2014 when she released her debut album.

Judges Comments: Bruno: “She knows how to work it. What you did so well is the tonality that you captured, it was elegant. It was beautiful.” Carrie Ann: “When I watch you I just get this sense that you are unstoppable. It feels like there is so much more inside of you.” Len: “You put in some recognizable steps that I could see, but it still kept a modern age. It is your best dance.” Judges Scores: Carrie Ann 9, Len 9, Bruno 9 = 27/30

Judges Comments: Bruno: “Demarcus the Titan. That was mind-blowing, you took the floor and you stalked it like a panther.” Carrie Ann: “Not your typical Argentine Tango at all, in fact, it almost leaned towards Paso with the intensity but I realize that is the story you are telling us.” Len: “The lifts were so great, in fact, this whole evening there were a lot of poignant moments, great dancing and you are no exception.” Judges Scores: Carrie Ann 9, Len 8, Bruno 9 = 26/30

Time for some results. The first couple who is in jeopardy is, Nancy and Val. And joining them in jeopardy are Tinashe and Brandon. The rest are safe and will return to dance next week.

The couple going home tonight is Nancy and Val.