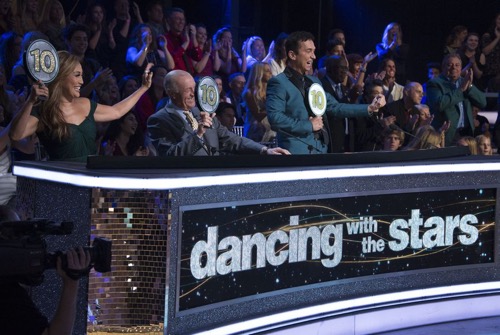 Each trio will perform a tango, cha cha, paso doblé, salsa, Argentine tango or Charleston, vying for America’s vote. At the end of the night, one couple will be eliminated.”

Judges Comments: Len: “They say two is company and three is a crowd, on this occaision, three was terrific. Lovely mix of steps between the three of you, would have liked a little more cha cha cha and there was a moment when a little thing happened.” Bruno: “I tend to agree with Len, that was dead sexy. He handled those two wild cats like a lion tamer. You went on the wrong foot, otherwise it was a fantastic routine.” Carrie Ann: “Sexy and hip action, all that going on. Last week you wowed us, tonight you were just ok, you were a little controlled. You held it and I want to congratulate you.” Judges Scores: Carrie Ann, 8 Len 8, Bruno 8 = 24/30

Judges Comments: Bruno: “The judge and the jury are unanimous, you are guilty of brilliance. The structure of the choreography was wonderful, it was superb.” Carrie Ann: “First of all Amy, it is so great to have you back. That was the most innovative choreography putting that trio together. My eyes knew exactly knew where to go, you were the star in the trio.” Len: “Doing a trio is a tough job, doing a tango is an even tougher job. I thought you handled it brilliantly well. Well done and I congratulate all of you.” Judges Scores: Carrie Ann 9, Len 8, Bruno 9 = 26/30

Judges Comments: Carrie Ann: “It started out rough but what I love is that when the violins came in all the energy came right into Emma. I liked seeing this new side of John, all the intention and the energy.” Len: “What I liked, no messing about, you went right into the dance. I love the way you interacted between the three of you, it had attack, I loved it.” Bruno: “It was a melodrama amongst the ruins. The actual music was very hard, takes such concentration because it is not regular. You did a very good job.” Judges Scores: Carrie Ann 7, Len 7, Bruno 7 = 21/30

Judges Comments: “It had lots of content, it was a polished performance. It needed a little more hip action, but a great routine. Well done the three of you.” Bruno: “Every week you are more confident, livelier, it’s like finding a new side of yourself every week. On the salsa you have to push the hips much more, but well done.” Carrie Ann: “I am blown away how great you are, you match each other. Sometimes maybe a little too relaxed, there were a few times where your heads weren’t matching, but well done.” Judges Scores: Carrie Ann 8, Len 8, Bruno 8 = 24/30

Judges Comments: Bruno: “The clash of the Titans, awesome power, those guns are for hire. I loved all the power and aggression but you can’t lose the artistry, but looking good.” Carrie Ann: “I love the way you showcase their physique, their physicality and the robustness of the way you both perform and its so unique to both of you. What was lacking is what Bruno was talking about, shaping, I felt DeMarcus was trying to match Rashad too much. I need you to be you.” Len: “You had the guns but not always the ammunition. It is a tough dance, it was a little bit flimsy on occasion.” Judges Scores: Carrie Ann 7, Len 7, Bruno 8 = 22/30

Judges Comments: Carrie Ann: “Last week you were really great, but this week you were better. What I loved about this was the contrast, you took two very different styles of dance and brought them together. It was so complimentary and you all shone so brightly.” Len: “The Charleston part needed a little more swivel, however, it was fun, it was snappy, and Lenny is a happy chappy.” Bruno: “It was as invigorating as a double espresso in Piazza Navona. Wonderful style, sharp, and you showcased your girls perfectly. Well done.” Judges Scores: Carrie Ann 9, Len 8, Bruno 9 = 26/30

Judges Comments: Len: “Witney, you were flying from Milo to Riker like a frisbee. It was fast, plenty of attack, it was in control the whole time. I would have preferred a little hip action. However, I thought it was wonderful and the best dance I have seen tonight.” Bruno: “You created so much energy, it was electrifying. Honestly, the details in the choreography were absolutely delicious. It was perfection.” Carrie Ann: “This is teamwork makes the dream work. Everything you did was so in synch. It was so many things but it was absolutely perfect.” Judges Scores: Carrie Ann 10, Len 9, Bruno 10= 29/30

Judges Comments: Bruno: “That was a unique experience. It was like I was watching Magic Mike, Tragic Mike and Mike and the Mechanics. The dance is open to interpretation. The timing was non-existent.” Carrie Ann: “Jenna, you get MVP. That was magical what you did with what you had. You are having fun Joe, I love it and it was great having Joe here.” Len: “It’s no longer that I’m speechless. It’s hard to put into words what I thought of that dance. What you’ve done with Joe and his chum is terrific.” Judges Scores: Carrie Ann 5, Len 5, Bruno 5 = 15/30

Judges Comments: Carrie Ann: “Very strong, but in the tango I wanted you to dance as one and it was like you were all dancing as three solos than a unit.” Len: “It was a good mix, I thought it was a really good job.” Bruno: “I saw a guy that really empowered his girls. You were strong, it had elegance and sophistication.” Judges Scores: Carrie Ann 8, Len 8, Bruno 9 = 25/30

Judges Comments: Len: “You nailed the hammer part, but the cha cha cha part was not so good. You need to get a bit more finesse in your technique.” Bruno: “You took the sledgehammer to the cha cha cha and nobody can carry their hands like that. It was fun watching you, really good performance.” Carrie Ann: “The world is a better place because you are in it. You didn’t miss a single step, there was no technique.” Judges Scores: Carrie Ann 7, Len 6, Bruno 7 = 20/30

Time for results. The first couple who is in jeopardy is Evanna and Keo. Joining them in jeopardy are Tinashe and Brandon. The rest are safe and returning next week to dance.

The couple who has the lowest judges scores and viewers votes, and leaving tonight is Tinashe and Brandon.