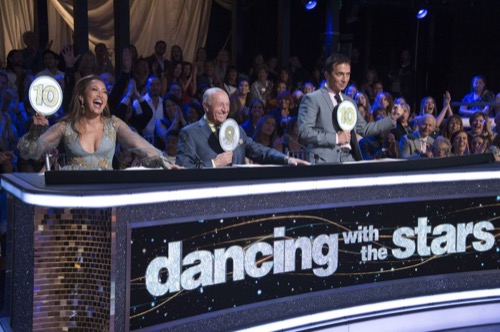 Judges Comments: Len: “There was no stressing, there was no messing. It was just a well crafted beautiful routine, the lovely chemistry between the two of you. Your footwork could have been a little bit cleaner, however, having said that for me you’ve been a little bit on a plateau for three weeks, this week, whoa ho ho.” Bruno: “Definitely Disney magic is stronger than ever, you were so in tuned, it was like two hearts beating as one, exquisitely lyrical, the flow of your lines, it was gorgeous.” Carrie Ann: “The way you danced made me believe in fairy tales, the way the quality of movement, the way you told the story, it was your best dance this season.” Judges Scores: Carrie Ann 10, Len 9, Bruno 10 = 29/30

Judges Comments: Bruno: “You nailed that character right on the bull’s eye. The feel, the style, the content, spot on every level.” Carrie Ann: “Your flair is fantastic, you had flair for days, the way you lead Cheryl, the momentum that you create, nobody is even close to you. You add a really nice finesse after every move that makes you spectacular.” Len: “I like that the dance mirrored the music, it was full of gusto and zest. You are a fantastic dancer, you cope admirably.” Judges Scores: Carrie Ann 10, Len 9, Bruno 10 = 29/30

Judges Comments: Carrie Ann: “A hero is born, here you are, we have been waiting for this breakthrough the whole season and it could not have come at a better time. Your athleticism, your grace, the way you do those lifts were ridiculous, well done.” Len: “It was jam-packed with lifts, kicks; that is like a Disney movie. You finish it and you just feel great. Full of attack, full of energy – not a lot of Charleston going on, however, I enjoyed it.” Bruno: “You have become a theater man, you could be on Broadway. You were always the leading man, you are very lightfooted, you never missed a beat. Your most complete performance to date, well done.” Judges Scores: Carrie Ann 9, Len 8, Bruno 9 = 26/30

Evanna Lynch and Keo Motsepe – Jazz – “When Will My Life Begin?” from “Tangled”

Judges Comments: Len: “I like the light and shade that was going on, fast and then slow it down. It had a lovely feel to it. It wasn’t a spectacular number, but it was well danced, it was a nice routine.” Bruno: “I really feel you have found your stride, you paint a pretty picture. You were a little bit behind or a little bit too far ahead, you have to work on that. The finish has to always be right on the beat.” Carrie Ann: “You did the Disney name proudly. In the beginning, you were a little narrow, don’t rush.” Judges Scores: Carrie Ann 8, Len 8, Bruno 8 = 24/30

Judges Comments: Bruno: “I can sense a very faint glimmer of hope. Don’t get too excited. The timing is slightly better, you still looked like you were in three different time zones, but at least you tried and you did a baby step in the right direction. You have to work on the quality, there is hope.” Carrie Ann: “Go, Joe! That was a vast improvement. The choreography, there were so many more steps and you didn’t miss any. You should be confident, everybody loves you. I want you to own the stage, it will make a difference in your performances.” Len: “I like you, Joe, you get knocked every week, but you dust yourself off and give it your all. My advice, if you are back next week, get in there, learn the dance, come out and give it to us.” Judges Scores: Carrie Ann 6, Len 5, Bruno 6 = 17/30

Judges Comments: Carrie Ann: “This is the beauty of our show, these kinds of moments. You have had a real transformation. You shifted, you opened and connected with all of us.” Len: “I liked that it was gentle, understated, but lovely fluidity.” Bruno: “I loved your determination, you don’t give up and you get there eventually. Your performances are stronger, don’t give up.” Judges Scores: Carrie Ann 9, Len 8, Bruno 8 = 25/30

Judges Comments: Len: “I liked the high energy, but you lost a bit of energy, but I thought you did a spectacular job. This was your best dance to date.” Bruno: “You brought some sparkle to the jungle. That was a proper quickstep.” Carrie Ann: “It was your best performance, everything was connected. This is exactly what we want.” Judges Scores: Carrie Ann 8, Len 8, Bruno 8 = 24/30

Judges Comments: Bruno: “You got the catch of the day. It was a bit slippery at times. You managed to get back though and it was a brave effort.” Carrie Ann: “I liked your posture, your diagonal lines. There is an improvement, I liked the way your focused.” Len: “You were right outside your comfort zone, I admired that you played it straight, credit to you, a proper waltz.” Judges Scores: Carrie Ann 7, Len 7, Bruno 7 = 21/30

Judges Comments: Carrie Ann: “That was a fabulous routine. What I really loved is that you pulled off a quick step that requires the most form and technique, in a unitard. It was an incredible, fantastic performance.” Len: “I must say you came out and had plenty of zipiedodah. I look for certain things, you lacked body contact, a lot of gapping going on.” Bruno: “I have no complaints, it was a blockbuster, bring on the sequel.” Judges Scores: Carrie Ann 9, Len 8, Bruno 10 = 27/30

The viewers votes from last Monday night have been combined with the judges scores from tonight. We will now be able to find out who is safe and who is in jeopardy.

The first couple in jeopardy is Demarcus and Lindsey. Joining them are Alexis and Allan.

On this fifth week of competition, the couple leaving, is neither. Everyone is safe on Disney night.