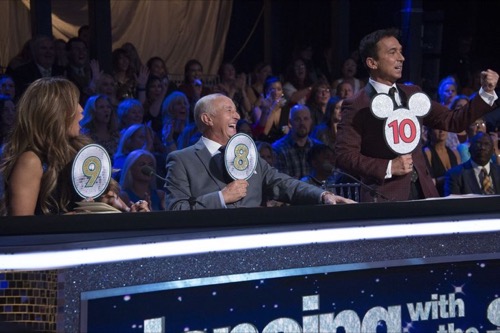 It’s Halloween night in the ballroom and the remaining 9 dancer take to the dance floor to dance to perform the bloodcurdling tricks and terrifyingly fun dances they learned this week.

Judges Comments: Len: “I’m not a big fan of jazz and contemporary, but some bizarre reason I thought this was spellbinding. It was terrific, it held my attention. First out and I think you will be the first one back next week.” Bruno: “It was mind bending and insanely good. It was so brilliant and twisted, but not just that, it was impecably acted. It was like watching American Horror Story condensed into one minute.” Carrie Ann: “You are so impressive, it was such a beautifully mature, nuance performance. That was not easy, I respect that you were so in control.”

Judges Comments: Bruno: “That was an historical tragedy on an epic scale. I appreciate that you attacked it like a war horse, but there were so many mistakes. You nearly dropped her on the end, you went on the wrong foot. You lost the refinement in the timing, but you went for it.” Carrie Ann: “My heart breaks because I see how much effort you put into this number. It is filled with content, you pushed yourself really hard, you never quite got your feet under you.” Len: “It wasn’t super and it wasn’t natural, but everything you did in hold was terrific. It all went a bit cranky when you were apart.”

Judges Comments: Carrie Ann: “You definitely lit up the ballroom tonight with that. Every dance step was executed with clarity. There were just a few little misses with the hands. Your lifts are out of this world.” Len: “It was full of rythm, full of interesting choreography. You kept right up, bottom line, tonight you had a breakthrough.” Bruno: “You were like the best living dead ever. The oil changed and the new spark plugs worked.”

Judges Comments: Len: “Plenty of tango content. I like that you kept your flexed knees, it was sharp, crisp as a pringle. You came out and you just sold the whole dance, it was full on.” Bruno: “I like what I see, she went from a tame pussycat to a wild panther. You were so strong, so sexy, so in control. Your lines were absolutely beautiful, I never felt you were trying to keep up with each other.” Carrie Ann: “You are so fierce tonight, stepping up to the plate, You nailed that number, you worked hard and it showed.”

Judges Comments: Bruno: “Call the doctor, that was like an Argentine nightmare. A phsycho on the loose. It was chilling, the dance was not on the menu but it was intruiging.” Carrie Ann: “It is so bizarre, but that was your best dance so far. You were just so authentically in the moment. It was a very simple Argetine Tango, well done.” Len: “It had mood and atmosphere, I would have preferred more Argentine Tango, but you did a good job.”

Judges Comments: Carrie Ann: “Thank you for your courage and vulnerability. You channeled so much energy tonight but the dance got away with you. Maybe you were forcing too much. It lacked a bit of elegance.” Len: “Scary Mary, you needed slightly cleaner feet. You lost your neck on ocaission. The saving grace is that it was full of tango content.” Bruno: “I liked it darling, let it all out. It is better out than in, you feel much better. The good thing is, you delivered what was on the menu. It said Tango and you did Tango.”

Judges Comments: Len: “Candy is dandy and so is that performance. A lot of content, a lot of fun, I sat back and I enjoyed it so much.” Bruno: “That really was a Halloween treat, enough sugar to last a lifetime. But in a good sense, everything you do is so effortless, even the most difficult lift, you approach them without putting any struggle in it. You really are an all American dancing beauty.” Carrie Ann: “You just light up the dance floor in a sweet way. I love the trust between you, there is no struggle. Everything is all there, it was a great performance.”

Judges Comments: Bruno: “Its alive and it moves, actually your Tango didn’t scare me. For once it actually looked like an Argentine Tango. Your timing tonight was the best ever.” Carrie Ann: “I am blown away that you learned how to dance, what a huge change. Jenna almost fell but you didn’t give up, I give you an extra point for that.” Len: “Sometimes on the darkest days a ray of sunshine breaks through and for me Joe that was your best dance, well done.”

Judges Comments: Carrie Ann: “I don’t have much to say, that was just shear perfection.” Len: “I like that you got the balance right between the theme and the dance. You also got the how of the technique and the wow of the performance, I saw nothing that I did not like.” Bruno: “The jive itself was spot on, perfection all the way.”

Time for some results. The first couple who is in jeopardy is Mary Lou Retton and Sasha Farber. Joining them are Alexis Ren and Alan Bersten. The rest of the couples are safe and will be back next week.

On this sixth week of competition, the couple leaving right now is Mary Lou Retton and Sasha Farber.