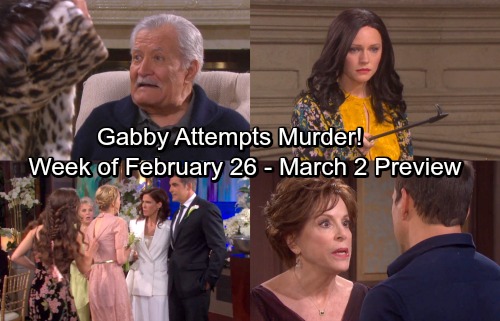 Days of Our Lives (DOOL) spoilers for the week of February 26-March 2 tease that some stunning moments are on the way. DOOL fans know that Abigail’s (Marci Miller) been sashaying around as “Gabby.” She takes on some of Gabi’s (Camila Banus) characteristics for this alternate personality, but she obviously puts her own spin on the character.

For example, Gabi has made threats against people like Andre (Thaao Penghlis), but “Gabigail” actually follows through on them! Days of Our Lives spoilers say Stefan (Tyler Christopher) will continue his efforts to understand the situation. That’s good since he’ll have to explain it to Vivian (Louise Sorel) soon. 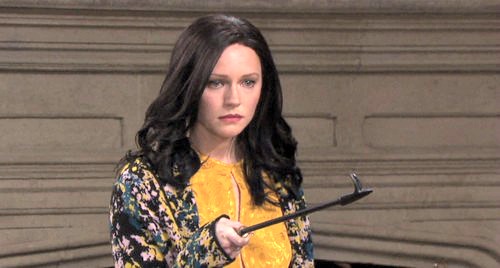 Abigail’s about to attempt another death by bludgeoning. In another one of “Gabby’s” wild episodes, she’ll grab the fireplace poker and lift it above Vivian’s head. Naturally, Vivian will fear for her life. She’ll raise her hands as she struggles to defend herself.

Luckily, Stefan will come to his mother’s rescue. He’ll walk in just in time to hear Vivian cry for help. Days of Our Lives spoilers say Stefan will snatch “Gabby’s” weapon away and try to talk some sense into her. Of course, that’ll be difficult since “Gabby” doesn’t understand logic. She makes excuses for why she knows things only Abigail could know. Stefan can tell that this is bad…REALLY bad.

Days spoilers state that Vivian will want to turn Abigail in. She’ll argue that they can’t keep living with a killer. Abigail clearly poses a serious risk. However, Stefan will manage to keep Vivian quiet. He’ll convince her that they have to frame someone else or they’ll all go down for what happened to Andre.

That won’t be the only drama Vivian’s involved in this week. Days viewers will also see her give Victor (John Aniston) a shock. When Vivian proposes a merger between Titan and DiMera, she’ll offer a bit of a bonus. Vivian will presumably have nothing underneath when she opens her coat. 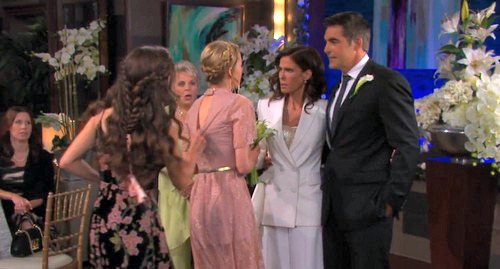 Victor will groan and shout about this hurting his eyes. He’ll probably contend that if Vivian wants to team up, this isn’t the way to get him on board. Elsewhere, Rafe (Galen Gering) and Hope’s (Kristian Alfonso) magical wedding will turn into a horror show. Claire will stop the ceremony to declare that Rafe cheated!

Since Hope and Rafe will technically already be married from their night on Smith Island, that’ll leave them with a tricky dilemma. We’ll give you updates as other DOOL news comes in. Stick with the NBC soap and don’t forget to check CDL often for the latest Days of Our Lives spoilers, updates and news.