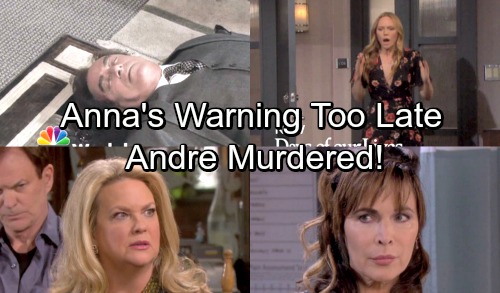 Days of Our Lives (DOOL) spoilers tease that Andre (Thaao Penghlis) will struggle to keep his plot under wraps. He’s been playing dirty with the help of Vivian (Louise Sorel) and Stefan (Tyler Christopher), but they may not be so helpful after all. Andre teamed up with them to overcome the power struggle at DiMera Enterprises, but he only succeeded in starting another one.

Nevertheless, Andre will do his best to gain the upper hand and keep his love life intact. Despite all the deception, Andre truly cares about Kate (Lauren Koslow). Days spoilers say Kate will continue to fall for Andre, but trust issues will remain. Since there have already been some red flags, Kate’s trying to protect herself. She’s suffered plenty of heartache in her lifetime, so she knows how to put up walls.

Andre will attempt to break those walls down, but that’s not going to be easy. That’s especially true when so many Salemites are wary of the devious DiMera. Anna (Leann Hunley) recently returned to town, so it’s time for her to butt in somebody else’s business again. She’s been doing a good job of that so far!

DOOL spoilers say Anna will give Kate some useful advice. Kate may not appreciate it, but that won’t stop Anna from sharing her concerns. Next week, Anna will offer a stern warning about Andre. She’ll contend that Kate’s setting herself up for disappointment.

Anna will argue that having any kind of faith in Andre would be a huge mistake. She’ll believe he’ll prove it to Kate soon enough. Days of Our Lives spoilers say Kate may defend Andre or at least her ability to take care of herself. Still, Anna’s words may haunt Kate as she ponders her marriage. She’ll undoubtedly wonder if Andre’s keeping major secrets.

It’s just a matter of time until Kate learns about Andre’s secret partnership. She won’t be pleased to learn Andre’s been working with Vivian and Stefan. Of course, Andre’s lies will be an even bigger problem. He watched Kate suffer over Theo’s (Kyler Pettis) ordeal and never mentioned that he was involved in the sabotage. It’s Andre’s fault Kate had to start a dangerous investigation.

However, Kate will not get the chance to confront her sneaky hubby. Days fans can expect Andre’s shocking murder next Friday. Kate could become a suspected killer. We’ll give you updates as other Days of Our Lives news comes in. Stick with DOOL and don’t forget to check CDL often for the latest Days of Our Lives spoilers, updates and news.