Days of Our Lives Spoilers: Arianne Zucker Weighs in on Nicole’s Tragic Death – Is She Really Dead, Possible Return? 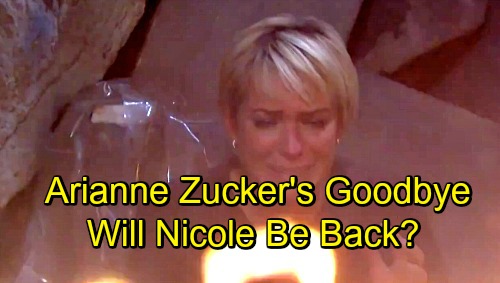 Days of Our Lives (DOOL) spoilers tease that Eric (Greg Vaughan) will face one of the worst blows of his life. Accidentally killing Daniel (Shawn Christian) was obviously a biggie, but this shocker will hit just as hard. Eric’s about to lose his true love! He adores Nicole (Arianne Zucker) and desperately wants a future with her, but DOOL’s about to kill her off instead.

Of course, a demise is rarely permanent on Days of Our Lives. Deaths on soaps like The Young and the Restless or The Bold and the Beautiful tend to stick, but Days embraces resurrections far more often. Will (Chandler Massey now, Guy Wilson at the time) was murdered right in front of us, but they found a way to undo it. Nicole’s death would be even easier to rewrite since no body will be recovered.

However, this is an important step on Eric’s difficult journey. He’d never let Nicole go if he knew she was still out there somewhere. DOOL is treating this like a real death and for now, it is. Days of Our Lives spoilers say Nicole will get trapped in an upcoming fire. Brady (Eric Martsolf) will get Holly to safety, but Nicole will be stuck behind too much debris.

Once Nicole realizes she’s a goner, she’ll say her goodbyes to Eric and urge him to leave. Naturally, Eric will refuse. He’ll want to go down in flames with Nicole if that’s how it has to be. Nicole will stand her ground and beg Brady (Eric Martsolf) to save Eric, so he’ll grant her final wish. Days of Our Lives spoilers state that Brady will knock Eric out and drag him from the fiery warehouse.

After the building explodes, Eric will pray and hope for the best. Unfortunately, only the medal he gave Nicole will be found. Brady and the fire chief will confirm that Nicole didn’t make it. Again, no body means this isn’t a done deal. Even if Nicole remnants were splattered everywhere, Days could probably fix it! That’s just what they do.

Nevertheless, Eric will fully believe Nicole is dead and that’ll absolutely destroy his heart. In a new issue of Soap Opera Digest, Arianne Zucker weighed in on this shocking twist. “It’s sad for the fans,” Zucker admitted. “These are two people who have wanted to be together for so long and this tragic incident happens. It’s bittersweet because it’s great story…left in turmoil again with Eric and Nicole.”

“Ericole” supporters will certainly mourn the loss, but at least Nicole’s going out with a bang. Days of Our Lives spoilers say the fallout will be fantastic and who knows? Nicole might still return someday! We’ll give you updates as other Days news comes in. Stick with DOOL and don’t forget to check CDL often for the latest Days of Our Lives spoilers, updates and news.

Can Eric rescue Nicole from certain death? Watch Days of our Lives, weekdays on NBC. pic.twitter.com/C3NQ7FnNPe