Days of Our Lives Spoilers: Battle For Holly Heats Up – Salem Residents Fight For Custody 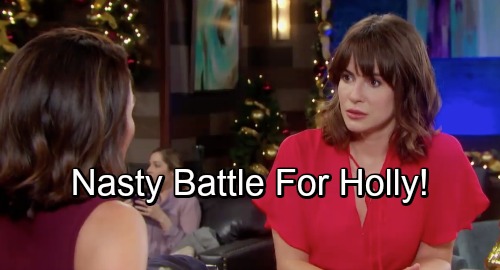 Days of Our Lives (DOOL) spoilers tease that Eric (Greg Vaughan) will be in for quite a fight when it comes to Holly. The new Days 2018-2019 promo shows several Salem residents with a vested interest in where and how Holly is raised. Of course, Nicole’s (Arianne Zucker) last wish was for Eric to raise Holly, but a couple other people will nevertheless vie for custody of the little girl.

First off, there’s Maggie (Suzanne Rogers), who states in the promo that since she’s Holly’s grandmother, Holly naturally belongs with her. Holly is Daniel’s (Shawn Christian) daughter, and thus Holly’s closest living relative. Plus, Maggie has ample means to help raise Holly.

But Maggie’s going to have some competition as a caretaker and female role model for Holly. Sarah (Linsey Godfrey) is also shown in the promo getting close to Eric and Holly. Sarah knew Nicole and Holly off-screen, and she feels a strong connection to her. And it looks like Sarah will think that Eric is the best guardian for Holly.

And then there’s Chloe (Nadia Bjorlin), who carried Holly and once fought for her custody against Nicole. It looks like Chloe will once again demand custody of Holly, as she’s shown in the promo telling Sarah, “Holly belongs with me and I’ll get a lawyer if I have to.”

But Sarah’s not going to be down with Chloe’s plans. Sarah and Chloe will clash, with Sarah telling Chloe, “A decent man like Eric will be a far better influence on Holly than you will ever be.” Ouch.

From the looks of the promo, we may have a custody battle on our hands in the near future, with Eric, Maggie, and Chloe each fighting for Holly. Who do you want to see raise Holly? Stay tuned to DOOL and don’t forget to check CDL often for the latest Days of Our Lives spoilers, updates, and news.