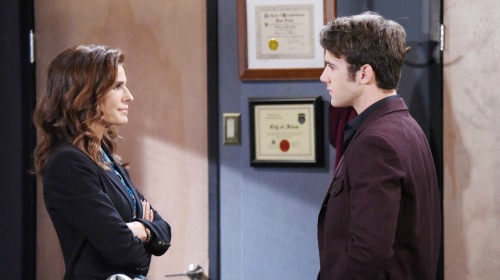 Days of Our Lives (DOOL) spoilers tease that Hope (Kristian Alfonso) will get some dreadful news. She recently had a disagreement with Marlena (Deidre Hall) and it was all about batty Ben Weston (Robert Scott Wilson). It turns out he’s not so batty anymore, but Hope still doesn’t want to see him roaming the streets. She can’t help it if she’s bitter about what Ben did to her loved ones.

Nevertheless, Hope will just have to get used to the idea. In the week ahead, Days of Our Lives spoilers say she’ll find out about Ben’s release. Hope will be miffed that Marlena let this happen, but she’ll ultimately accept it. It looks like Hope will shift gears and focus on handing out some warnings.

Days spoilers state that JJ (Casey Moss) will get a heads-up soon. He loathes Ben even more than Hope, so he’ll also be furious about this killer’s release. DOOL fans know that Ben killed Paige (True O’Brien) and she wasn’t lucky enough to get Dr. Rolf’s (William Utay) back-from-the-dead serum. JJ was the one to find Paige’s strangled body. It’s a brutal memory that’ll stay with him forever.

JJ loved Paige and was robbed of the chance to truly patch things up with her. He can’t just forgive Ben for that. Plus, Ben tormented JJ’s sister in ways most people could never imagine. Abigail (Marci Miller) barely survived everything Ben put her through, so JJ obviously has a major beef with him.

In fact, JJ threatened to kill Ben during a previous stint. He held a gun to Ben’s head and desperately wanted to pull the trigger. JJ thankfully didn’t do the deed, but he proved he can be driven to the edge. Once JJ hears Ben’s being released from the sanitarium, it should stir up that familiar craving for vengeance.

Will JJ once again be pushed too far? The thought of Ben scoring his freedom will certainly set JJ off. He’ll want to confront Salem’s worst enemy and blast him with everything he’s got. This confrontation could easily turn violent, but at least we know Ben will survive. Robert Scott Wilson’s on contract, so he’ll be sticking around for a while. Days viewers will get to see plenty of exciting drama!

It sounds like some fantastic scenes are coming up. We’ll give you updates as other Days of Our Lives details emerge. Stay tuned to DOOL and don’t forget to check CDL often for the latest Days of Our Lives spoilers, updates and news.