BY hellodrdavis on September 3, 2018 | Comments: one comment
Related : Days of Our Lives, Soap Opera, Spoiler, Television 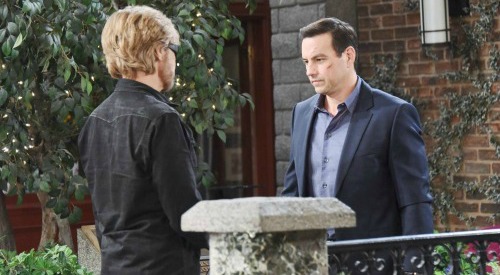 Days of Our Lives (DOOL) spoilers tease that Steve (Stephen Nichols) will be going to prison for an indefinite amount of time after he’s arrested for espionage. Nichols’ last airdate was August 31, and Steve will be arrested and charged off-screen. But his story will continue through Kayla (Mary Beth Evans), who will learn exactly what got Steve arrested in the first place.

To Kayla’s horror, she’ll learn that Steve’s bionic eye is what’s caused him to be charged with espionage. The bionic eye, which is cutting-edge experimental technology, is owned by a company controlled by DiMera Enterprises. As viewers will recall, Stefan (Tyler Christopher) was considering selling the technology to the US Government before Kayla intervened and begged Stefan to let Steve use the technology.

It appears that the government will have been keeping tabs on the technology, and they won’t like it that Steve’s got the eye. Why? Well, according to Days spoilers, the eye has the capability of recording everything it sees. That means that everything Steve’s been seeing – including top-secret ISA documents – may have been recorded and stored in a database somewhere, and could be used for nefarious purposes.

Of course, there could be more to the story. Steve getting hauled off for espionage seems to have Stefan written all over it. Is it possible that Stefan knew about potential security issues with the bionic eye and didn’t bother to inform Kayla? Stefan may have then tipped off the government that Steve’s eye could be used for treason, just to get rid of Steve. It sounds just like something Stefan would do.

And what will this all mean for Stefan and Kayla going forward? Stefan’s been forcing Kayla to share Abigail’s (Marci Miller) medical records with him by threatening to turn off the bionic eye, which apparently he can do at the push of a button. But now that the government’s getting involved, will they confiscate the technology and thus eliminate Stefan’s hold over Kayla?

It would be good to see Kayla out from other Stefan’s thumb, now that she’ll have to worry about trying to get Steve out of jail. She may also have to worry about Steve losing his eyesight again, as the government could decide to deal with the issue by permanently turning off Steve’s eye. Steve could go blind again!

What do you think the future holds for Steve and his eye? And do you think Stefan is somehow behind his arrest? Stay tuned to DOOL and don’t forget to check CDL often for the latest Days of Our Lives spoilers, updates, and news.