Days of Our Lives Spoilers: Chad Tries to Accept Abigail’s Baby, But War with Stefan Brings Setbacks – Gabi Has More Tricks in Store 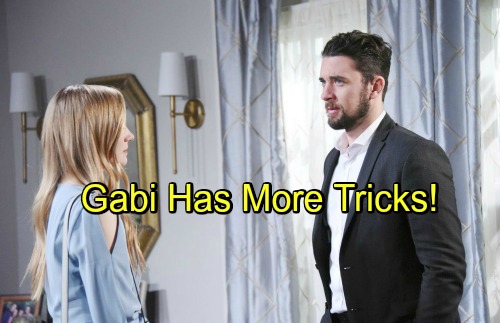 Days of Our Lives (DOOL) spoilers tease that Chad (Billy Flynn) will slowly soften toward Abigail (Marci Miller). He lashed out when Abby told him about her pregnancy, which wasn’t exactly fair. It’s not right for Chad to treat Abigail like she betrayed him. She was mentally ill at the time, so she’s Stefan’s (Tyler Christopher) rape victim. Chad really needs to keep that in mind.

However, some anger was only natural. Maybe it was a bit misplaced, but everyone can understand Chad’s frustration. He was anxious to have a baby of his own with Abigail, but now she’s having one with his loathed brother. Chad hates Stefan with every fiber of his being. He snarled that Abigail was asking him to live with a constant reminder of what they did.

Nevertheless, Abigail will stand by her decision to keep this child. That’s good since the baby is actually Chad’s! Gabi’s (Camila Banus) deception will continue to make major waves for “Chabby,” but Chad will try to hang in there. Days spoilers say he’ll have a deep conversation with Abigail and agree to make this work if they can.

Abigail will be hopeful that they can fully patch things up. She’ll realize they have a complicated road ahead, but she’ll believe their love can survive. Chad and Abigail have been through a lot together, so they know how to overcome obstacles. They just have to remember what they’re fighting for.

Of course, Days of Our Lives spoilers say more drama awaits. Gabi certainly isn’t done stirring the pot! DOOL fans can also watch Chad and Stefan’s corporate war heat up. Next week, Chad will make a move that unintentionally gives Stefan an advantage. Stefan will exploit Chad’s weakness, so he should get the upper hand in their brother battle.

That could definitely fuel Chad’s resentment and add to his struggles with Abigail. Bottom line, Chad and Abby’s marriage won’t be on solid ground for a while. Days of Our Lives spoilers say Abigail will hold out hope for their future, but she’ll inevitably worry about what’s to come.

Can Chad and Abigail get over Gabi’s curveball? Will the truth fix everything sooner or later? Will their marriage issues remain instead? We’ll give you updates as other Days news emerges. Stay tuned to DOOL and don’t forget to check CDL often for the latest Days of Our Lives spoilers, updates and news.