Days of Our Lives Spoilers: Ciara Drawn Back Toward Ben – But Pregnant With Tripp’s Baby?

BY hellodrdavis on October 3, 2018 | Comments: one comment
Related : Days of Our Lives, Soap Opera, Spoiler, Television 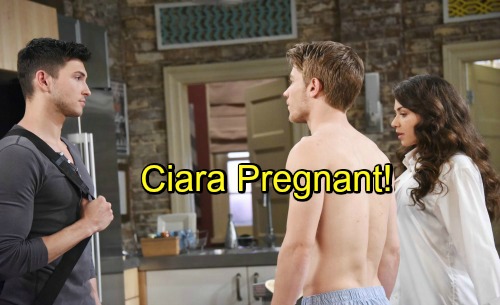 Days of Our Lives (DOOL) spoilers tease that Ciara (Victoria Konefal) may have a big dilemma on her hands soon. She and Tripp (Lucas Adams) just took their relationship to the next level and made love, but when they did, Ciara was operating under the assumption that Ben (Robert Scott Wilson) had started the fire at the cabin that nearly took her life and that he was out of her life for good.

But now Ciara knows that the evidence against Ben was planted, so one has to wonder what her next move will be. Sure, she asked Ben to move out of the apartment, but this may have been a rash decision. She and Tripp had just made love before Ben returned and the situation was just plain awkward.

This surely isn’t the end of the road for Ben and Ciara. Ciara may find that she keeps thinking about Ben, especially since she knows that there’s someone out there who set Ben up to look guilty for setting the fire. Plus, there’s real chemistry between Ciara and Ben, so it’s not going to be so easy for Ciara to just move on.

It probably won’t be long before Ciara’s drawn back toward Ben, and that will cause a real dilemma because Ciara does truly love Tripp. But she also clearly has feelings for Ben, so she might need to take some time to sort out her feelings and figure out who she wants to be with long-term.

There could be a wrinkle, though, that might complicate Ciara’s decision. It’s entirely possible that Ciara will end up pregnant with Tripp’s baby. What if Ciara ultimately decides to be with Ben, but then discovers that she’s pregnant by Tripp? That would be the perfect soapy scenario to drive Ciara back in Tripp’s direction, even though her heart really belongs to Ben.

What do you think will happen? Will Ciara wind up pregnant with Tripp’s baby? Stay tuned to DOOL and don’t forget to check CDL often for the latest Days of Our Lives spoilers, updates, and news.