Days of Our Lives Spoilers: Ciara Fights for Ben’s Freedom – Tripp Demands Answers About Her Feelings for Reformed Killer 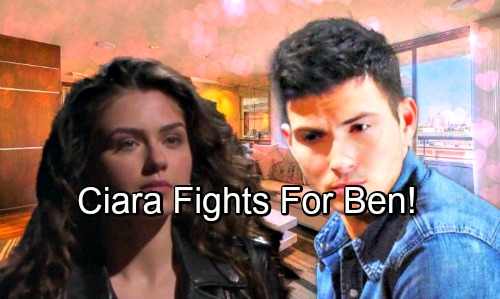 Days of Our Lives (DOOL) spoilers tease that Ciara (Victoria Konefal) will fight for Ben’s (Robert Scott Wilson) freedom. Naturally, Hope (Kristian Alfonso) and Rafe (Galen Gering) will be working just as hard to put Ben away. They fully believe Ben set the cabin on fire and left Ciara there to die.

Ciara doesn’t have proof that Ben’s innocent, but she’s choosing to buy his story. She believes Ben’s changed for the better, so she’ll continue to stand by him. Days of Our Lives spoilers say Ciara will do something surprising to show her devotion. Next week, her daring move will catch Rafe and Hope off guard.

Ciara would be willing to testify about the huge shifts she’s seen in Ben. She knows he used to be a murderous monster, but he’s fine now. As long as Ben’s on his meds, Ciara feels safe around him. However, her personal views may not be enough to keep Ben out of the sanitarium. Ciara might realize she has to think bigger and bolder.

Could Ciara lie and say she set the blaze? That’s one DOOL possibility to consider. Hope and Rafe wouldn’t believe Ciara’s confession, but they might have to accept it. There’s no evidence of the cause just yet, so Rafe and Hope just don’t have much to go on.

Of course, the cause could eventually be determined and clear both cabin dwellers. Ben cooked several times during their stay, so maybe he left a hot plate on or something. He was totally out of control before he took off to get his medication. Ben was clearly in no condition to double-check the appliances!

Whatever the case, Tripp (Lucas Adams) will be stunned by Ciara’s level of commitment. He’ll realize she would’ve done just about anything to help Ben. Days of Our Lives spoilers say Tripp will ultimately get straight to the point. He’ll want to know if Ciara’s interested in Ben romantically.

What will Ciara’s answer be? Days may not go all in on “Cin” right away, but Ciara’s definitely getting there. Likewise, Ben cares about Ciara more than she’ll ever know. Are you anxious to see them get together? We’ll give you updates as other Days news comes in. Stay tuned to DOOL and don’t forget to check CDL often for the latest Days of Our Lives spoilers, updates and news.