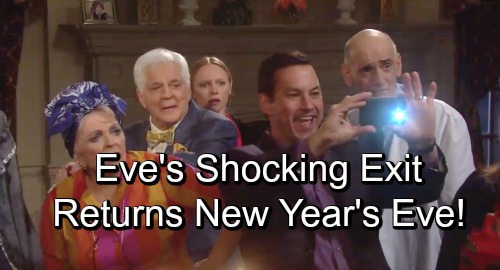 Days of Our Lives (DOOL) spoilers tease that we’ve got some comings and goings news to pass along. For starters, let’s discuss some Halloween comebacks. Thaao Penghlis will return as Andre (Thaao Penghlis) in a startling nightmare. The ghost of Anjelica Deveraux (Judith Chapman) past will also pop up to deliver a shock.

Kristian Alfonso will trade her role as Hope for a brief Princess Gina comeback. This is sure to be a can’t-miss episode, so DOOL fans will want to tune in. You can check out all the silliness and spookiness on Wednesday, October 31.

Other Days of Our Lives spoilers say we’ll see a startling departure. Eve (Kassie DePaiva) will abruptly decide to gather up her belongings and hit the road. After another blowup with Brady (Eric Martsolf), Eve will announce that she’s leaving. However, she’ll want to give Jennifer (Melissa Reeves) a warning first.

Days viewers know Eve tends to play the blame game. She never thinks anything is her fault, so she’ll hold Jennifer responsible for her pain. If Jennifer hadn’t come clean to Eric (Greg Vaughan), Eve would still be happily engaged to Brady. To take it a step further, Nicole (Arianne Zucker) would probably still be alive – although she’d be stuck under Xander’s (Paul Telfer) ruthless control.

Of course, Jennifer couldn’t predict the horror that’d unfold. Furthermore, she’ll think Eve only has herself to blame for her pain. Days of Our Lives spoilers say Eve will vow to get revenge and you can bet she’ll keep that promise. She’ll be back down the road, so be prepared for some surprises.

In an interview with Soap Opera Digest, Kassie DePaiva talked about her exit and upcoming return. She was stunned when the show opted to write her out, but they assured her she’d be back for a new story. DePaiva confessed that she had her doubts about Days following through on that plan, but it all worked out.

“So Eve leaves on Halloween,” DePaiva said. “She takes her broom and flies off. And she comes back on New Year’s Eve.” It sounds like the new year will indeed bring a new Eve! That vengeful mission we mentioned should finally come into play, so Eve may show off an even more ruthless side.

That’s it for comings and goings. We’ll give you updates as other Days details emerge. Stay tuned to the DOOL and don’t forget to check CDL often for the latest Days of Our Lives spoilers, updates and news.