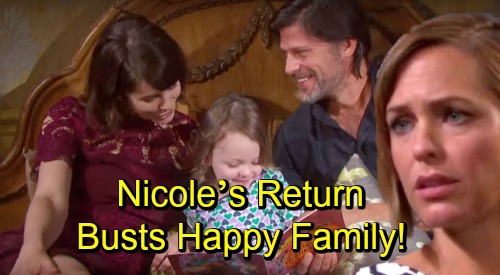 Days of Our Lives (DOOL) spoilers tease that a fierce custody battle is brewing. DOOL fans know where Nicole (Arianne Zucker) stood on Holly’s upbringing. Her dying wish was for Eric (Greg Vaughan) to take Holly and raise her as his own. Nicole couldn’t ask for a better man to help her daughter learn and grow. She expected Eric to be a fantastic dad, so he’ll do his best to make that happen.

However, major opposition is on the way. Maggie (Suzanne Rogers) is Holly’s grandmother, so she’ll feel like she should be the one who gets custody. She’ll shut down Sarah’s (Linsey Godfrey) attempts to change her mind.

Maggie will naturally grow attached to Holly and want to keep her around as much as possible. She may view her granddaughter as her last link to Daniel (Shawn Christian). It’s not like Melanie’s (Molly Burnett) around anymore and Chloe (Nadia Bjorlin) never seems to bring Parker by.

Speaking of Chloe, she’ll also throw her hat in the ring. Days viewers will recall that Chloe raised Holly for a while. She was a surrogate, but she formed a bond with the kid and wanted to keep her. Nicole fought hard to get her daughter back, but that doesn’t erase the connection Chloe made with Holly. She’ll believe this is her chance to step up and be a mom to Holly after all.

Of course, Sarah won’t think it’s right to ignore what Nicole wanted. As Eric grows closer to Holly, Sarah will see what a great stand-in father he’s becoming. She’ll want Eric to honor Nicole’s memory and find happiness with Holly. Sarah will fight for Eric to be Holly’s guardian and that fight will likely pay off.

In the midst of all this, Days of Our Lives spoilers say Sarah will end up falling for Eric. They’ll turn into a sweet family with Holly right in the middle. Unfortunately, they may not live happily ever after! Nicole is returning to Days in 2019, so it looks like she survived that explosion and may want her child back. She’ll probably want Eric back as well, but what about his next love Sarah?

Nicole just might burst Eric’s new bubble and prompt some soul-searching! We’ll give you updates as other Days of Our Lives news comes in. Stay tuned to DOOL and don’t forget to check CDL often for the latest Days of Our Lives spoilers, updates and news.