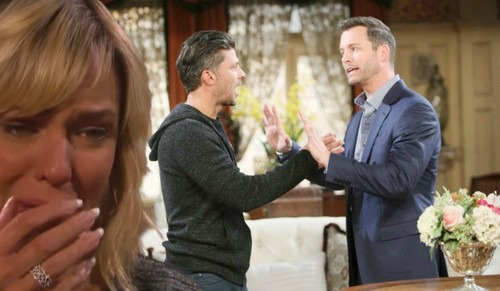 Days of Our Lives (DOOL) spoilers tease that Jennifer (Melissa Reeves) will set off an explosive chain reaction. Despite Eve’s (Kassie DePaiva) best efforts to stop her, Jen just won’t be able to keep her secret. She’s an honest person at heart, so she’ll decide to spill everything to Eric (Greg Vaughan).

Jennifer will explain that Brady (Eric Martsolf) blackmailed Nicole (Arianne Zucker) into leaving town. She’ll reveal that Nicole killed Deimos (Vincent Irizzary) and fled to avoid charges. Brady would’ve turned her in if she’d stuck around. Nicole couldn’t risk losing Holly, so she obeyed Brady’s orders and kept Eric in the dark about why she was bailing.

Eric will be upset that Jennifer kept this from him, but most of his anger will be directed at Brady. He recently patched things up with his brother, but their newfound peace will go right out the window. Days of Our Lives spoilers say a heated showdown is brewing. Eric will confront Brady, so DOOL fans should expect some tense scenes.

Brady may be a mixture of apologetic and defensive. Deep down, he knows what he did was wrong. Brady’s been feeling guilty lately, but Eric’s rage could open old wounds. As Eric rants about what his brother did, Brady may shout that he was driven to it. He was all set to build a life with Nicole, but she just couldn’t stay away from Eric.

Of course, Eric won’t think there’s any excuse for Brady’s actions. Days of Our Lives spoilers say their faceoff will lead to another. Eve’s secret will come out as well, which means she’ll pay the price for her silence. Brady will realize Eve cost him custody of Tate (Colin and Kyle Schroeder), so their relationship will quickly blow up. He’ll determine that Eve isn’t the person he thought she was.

At that point, Days spoilers say Brady and Eric will head down very different paths. Nicole’s still out there somewhere, so Eric will take off in search of her. As for Brady, he’ll be bitter and vulnerable. Kristen (Stacy Haiduk) may find a way to capitalize on that, especially since Brady secretly carries a torch for her.

It looks like even more Salem bombshells are ahead. We’ll give you updates as other Days news comes in. Stick with DOOL and don’t forget to check CDL often for the latest Days of Our Lives spoilers, updates and news.