BY hellodrdavis on September 25, 2018 | Comments: one comment
Related : Days of Our Lives, Soap Opera, Spoiler, Television 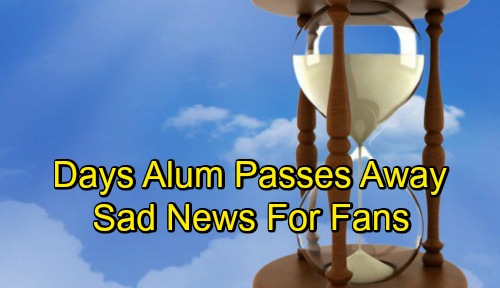 Days of Our Lives (DOOL) spoilers is saddened to report the death of a beloved Days alum. Frank Russell Parker, who portrayed Grandpa Shawn Brady on the NBC soap, passed away on September 16, 2018, in Vacaville, California. He was 79 and died from complications of Parkinson’s and dementia.

Frank appeared in numerous films and television series during the 1960s and 1970s, including Battlestar Galactica, Wonder Woman, and Quincy, M.E. He also appeared in various soap operas throughout the years, including General Hospital (on which he portrayed Paddy Kelly) and The Young and the Restless.

But Frank was best known for his role as Grandpa Shawn Brady on Days of Our Lives. He began in the role in 1983 and portrayed Shawn Brady until the character’s death in 2008. Viewers will remember that Grandpa Shawn heroically gave up his oxygen mask to save Bo’s (Peter Reckell) life when their airplane experienced problems and there weren’t enough oxygen masks to go around.

In addition to being a wonderful actor, Frank was an accomplished singer and a showman at heart. As stated in his obituary, “Frank was a people person; he touched many lives and was loved by everyone. He could light up a room with his singing voice and was known to burst into song at any moment. He was a ham and loved the spotlight.”

We send our sincerest condolences to Frank’s family. He will be missed. Stay tuned to DOOL and don’t forget to check CDL often for the latest Days of Our Lives spoilers, updates, and news.