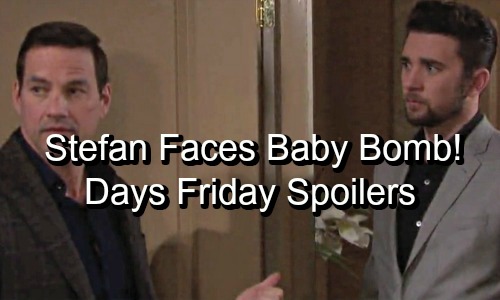 Days of Our Lives (DOOL) spoilers for Friday, July 20, tease that Eli (Lamon Archey) and Lani (Sal Stowers) will say a tough goodbye. They’ll have a small funeral for baby David, so DOOL fans can expect some emotional moments. Abe (James Reynolds) and Valerie (Vanessa Williams) will support their kids through this heartbreak. They can’t take their pain away, but they can offer plenty of love.

Lani and Eli will also lean on each other during this family crisis. Days spoilers hint that their relationship could start to shift soon. Will Eli and Lani fall in love as they deal with their heartache? They’ll at least grow closer, so stay tuned to watch a deeper bond form between them.

Since Gabi probably can’t have more kids, she won’t be keen on letting Abigail abort hers. Plus, Gabi wouldn’t want Abigail to get rid of Chad’s child. She’s angry and vengeful, but she’s not a monster. Besides, an abortion would bring an end to Gabi’s latest plot. She’s not done seeking revenge, so she’ll keep her scheme going with a shocking move.

Days of Our Lives spoilers say Gabi will deliver the fake results to Stefan. She’ll pretend she handed them over by mistake, but she’ll know exactly what she’s doing. Stefan will be stunned when he reads the info in front of him. He’ll ask if Abigail is really pregnant with his baby.

While Stefan wraps his head around that bogus news, more drama will be happening across town. Days of Our Lives spoilers state that Will’s (Chandler Massey) got a bombshell headed his way. A cryptic note will leave Will on edge, so this is undoubtedly about Leo (Greg Rikaart).

Once Will reads the mysterious message, he’ll realize someone may know the story behind Leo’s disappearance. Will and Sonny’s (Freddie Smith) deadly secret is in jeopardy! We’ll give you updates as other Days details emerge. Stick with DOOL and don’t forget to check CDL often for the latest Days of Our Lives spoilers, updates and news.