Days of Our Lives Spoilers: Hope Lashes Out At Tripp – Blames Him For Ciara’s Disappearance

BY hellodrdavis on June 15, 2018 | Comments: one comment
Related : Days of Our Lives, Soap Opera, Spoiler, Television 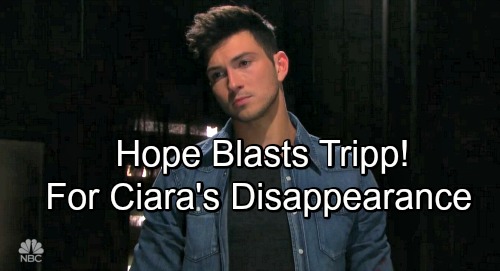 Days of Our Lives (DOOL) spoilers tease that Hope (Kristian Alfonso) will begin an intense and frantic search for Ciara (Victoria Konefal). Ciara hopped on her motorbike in a huff after catching Tripp (Lucas Adams) and Claire (Olivia Rose Keegan) naked on the couch. As viewers know, Ciara wound up crashing her bike and was rescued by Ben (Robert Scott Wilson). Ben and an injured Ciara are now holed up in a remote cabin together.

Neither Hope nor Tripp, however, have any idea where Ciara is or whether she is ok. Tripp filled Hope in on what went down with Claire, and that Ciara had finally told him about her rape by Chase (Jonathan McClendon). Hope knows that Ciara must have left the scene very upset, and she’s naturally worried, given Ciara’s history of driving recklessly on her motorbike.

Hope became even more worried when it became apparent that Ciara was missing. Hope and Tripp will search fervently for Ciara, but it looks like at the same time there will be some serious tension between them. Days spoilers say that Hope will lash out at Tripp for his role in driving Ciara off. Hope has quite a temper, and she’ll probably be quick to blame Tripp for not contacting her sooner when Ciara left.

Hope may also lay into Tripp for moving on with Claire so quickly after Ciara broke up with him. Hope is very protective of Ciara and won’t like it that Tripp’s actions may have communicated to Ciara that she is somehow “damaged” because she’s not ready to be intimate with Tripp. What Tripp did with Claire is essentially the same thing that Rafe (Galen Gering) did with Sami (Alison Sweeney) after Hope and Rafe broke up. That will likely hit a nerve for Hope, so watch out, Tripp!

Hopefully, this drama between Hope and Tripp will be short-lived and won’t interfere with their search for Ciara. They need to focus and they’ve got a lot of details to put together so they can find Ciara. If they put two and two together and realize that Ciara could be on the outskirts of town where Chad (Billy Flynn) dropped Ben off, they’ll be in good shape.

How long will it take Hope and Tripp to find Ciara? Hopefully, they’ll get a lead soon! Stay tuned to DOOL and don’t forget to check CDL often for the latest Days of Our Lives spoilers, updates, and news.