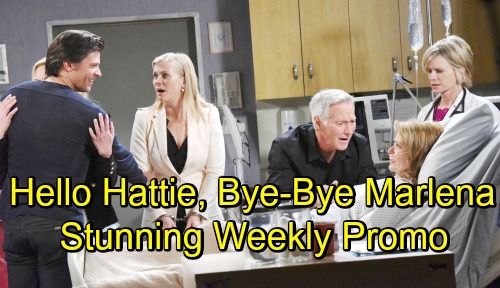 Days of Our Lives (DOOL) spoilers for the week of September 17-21 tease that we’ll see a real game-changer. Marlena’s (Deidre Hall) been knocking on death’s door, but she’ll suddenly make a miraculous recovery. However, things are rarely as they seem on a soap. That’ll certainly be the case in this storyline. “Marlena” will actually be her crafty and hilarious lookalike, Hattie (Deidre Hall)!

Hattie always causes chaos whenever she’s in town, but she was invited to do it this time. Days of Our Lives spoilers say a sneaky swap went down behind the scenes. DOOL will explain John’s (Drake Hogestyn) grand plan in the week ahead. It appears they’ll show some fake flashbacks to let everyone in the loop.

John couldn’t stand by and watch Marlena slip away in front of him. As a result, he broke Hattie out of Statesville with a little assistance from Roman (Josh Taylor). Kayla’s (Mary Beth Evans) role was to move Marlena to another area of the hospital and play along. It’s a brilliant idea, but keeping up the lie will present a few problems.

Days of Our Lives spoilers state that Hattie will go overboard as usual. Since this whole plot hinges on her, she’ll know she can do just about anything she wants. Hattie might as well have some fun! She’ll decide two of Marlena’s family members deserve payback for what they’ve done.

Of course, we’re talking about Sami (Alison Sweeney) the shooter and Belle (Martha Madison) the plug-puller. DOOL’s weekly preview shows Sami crying and declaring that her mom’s going to be OK. Hattie will snap that it’s no thanks to Sami. With a wave of her hand, “Marlena” will tell John to get Sami out of there before she finishes her off.

Next, it’ll be Belle’s turn for criticism. She’ll bring some flowers later, but Hattie won’t appreciate them. The latest Days promo shows Hattie wondering, “Did you ask for the ‘sorry I almost killed my mom’ bouquet?” Belle will look stunned by “Marlena’s” attitude. She’ll argue that she was just honoring her mother’s wishes, but Hattie will think she should’ve taken John’s side.

Days spoilers say Hattie’s going to be a real handful for John and especially Roman. Her affection for the latter will definitely spark some funny situations. We’ll give you updates as other DOOL news comes in. Stick with the NBC soap and don’t forget to check CDL often for the latest Days of Our Lives spoilers, updates and news.