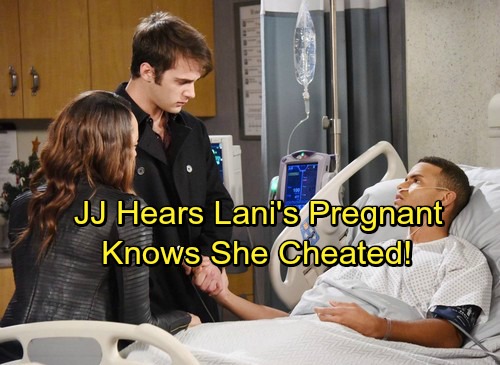 Days of Our Lives (DOOL) spoilers tease that JJ’s (Casey Moss) relief will be short-lived. Another major dose of guilt is headed his way. For starters, Theo’s (Kyler Pettis) recovery won’t go as well as his doctors hoped. He’ll need special treatment, so he’ll have to leave his loved ones for at least a year. There may not be any guarantees that Theo will ever get back to 100 percent.

JJ was thrilled when he thought Theo was going to be OK. He felt like his life was finally turning around. Abe (James Reynolds) forgave JJ and Theo assured him that none of this was his fault. JJ even reunited with Lani (Sal Stowers), so he’ll be devastated when everything comes crashing down again.

As JJ battles regrets, he’ll try to keep his mind out of a dark place. Since Days already showed JJ contemplating suicide, they probably won’t repeat themselves by going there again. JJ will still have Abe, Theo and Lani on his side, so at least things won’t be quite as grim as before.

Nevertheless, DOOL fans can expect some difficult moments for JJ. Days spoilers say Theo’s setback will lead to a big decision. JJ will determine that he doesn’t deserve to be a detective anymore. He won’t know if he can handle that kind of pressure anyway. JJ will turn in his resignation and head down a different road.

Will JJ stay on this new path or will he ultimately return to the force? Time will tell, but JJ’s life will get worse before it gets better. Days of Our Lives spoilers state that another round of bad news is in his future. JJ will overhear a shocking conversation next week and it’ll really throw him for a loop.

Lani will realize she’s pregnant, so she’ll choose to confide in someone. She might tell Eli (Lamon Archey) or ask a friend for guidance instead. Regardless, JJ will be nearby to listen in on this discussion. Days of Our Lives spoilers say he’ll be stunned by the baby bombshell. The timing doesn’t add up for Lani and JJ, so he should know that this can’t be his kid.

JJ’s world will be turned upside down once more. It sounds like DOOL has some great drama in the works. We’ll give you updates as other details emerge. Stick with the NBC soap and don’t forget to check CDL often for the latest Days of Our Lives spoilers, updates and news.