Days of Our Lives Spoilers: Jordan Heads Back to Salem – Timing Perfect for Steamy Rafe Reunion? 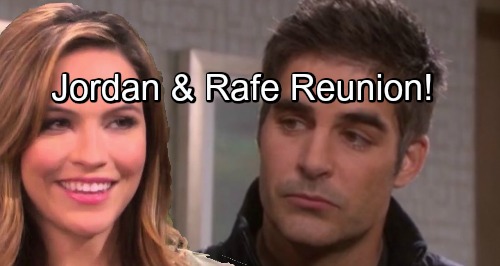 Days of Our Lives (DOOL) spoilers tease that hot drama’s coming up Hope (Kristian Alfonso) and Rafe’s (Galen Gering) marriage. DOOL fans know they’ve already had to overcome plenty of hurdles. They tied the knot in a private ceremony, but chaos erupted at their public one. Hope learned Rafe betrayed her with Sami (Alison Sweeney), so they’ve been on a long and difficult road back to each other.

Unfortunately, Hope will put a new secret between them soon enough. During the week of November 26-30, Ted (Gilles Marini) will head back to Salem. He’ll surprise Hope when he shows up and begs for help. Days of Our Lives spoilers say Hope will agree to hide Ted and keep him out of Stefan’s (Tyler Christopher) dangerous path. She’ll also keep Rafe in the dark, so that’ll bring trouble later.

After Rafe catches Ted in a hotel room Hope booked, Days spoilers say he’ll blow his top. Ted will be shirtless and fresh out of the shower, so the situation will certainly look suspicious. To make matters worse, Ted will insist that Hope’s cheating on Rafe. That probably won’t be true, but the statement will earn Ted a punch to the face!

Days of Our Lives spoilers say this could spark major conflict between Hope and Rafe. They may be back to square one thanks to Hope’s deception and Rafe’s violent reaction. Hope might actually move on with Ted or at least consider the idea. Many DOOL viewers would like to see Hope and Rafe head in new romantic directions. Putting Hope with Ted would be a nice start.

Of course, that’d still leave Rafe in need of a lovely lady. Who might he be paired up with? Perhaps a big comeback could help with that. Days of Our Lives spoilers say Jordan (Chrishell Hartley) will return on February 4. She had a steamy romance with Rafe in the past and they parted ways on good terms.

Could a Rafe and Jordan reunion be in the works? These two used to have some solid chemistry, so it’d be a great plan. Jordan will also be back for some Ben (Robert Scott Wilson) mayhem, but she may squeeze in some love while she’s around. Her reformed killer brother won’t dominate all her airtime.

Will Jordan enter Rafe’s life again or will someone else catch his eye? Is the end near for Rafe and Hope’s marriage? We’ll give you updates as other Days news comes in. Stay tuned to DOOL and don’t forget to check CDL often for the latest Days of Our Lives spoilers, updates and news.