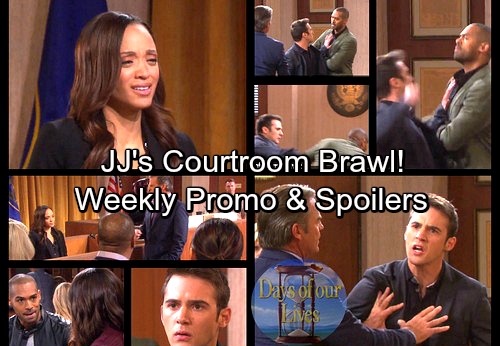 Days of Our Lives (DOOL) spoilers for the week of March 19-23 tease that the pressure will rev up for Lani (Sal Stowers). For starters, she’ll face a tense confrontation with Eli (Lamon Archey). Valerie (Vanessa Williams) is slowly making progress with her son. Eli’s starting to see how much he’d be missing out on if he let JJ (Casey Moss) raise his kid.

DOOL fans can expect Lani to panic over Eli’s shifting opinion. When he drops hints about changing their agreement, Lani will do her best to keep their plan intact. She’ll feel like this would destroy JJ, but Eli will remind her that this is his child. Lani’s asking him to give up a lot for the sake of her relationship and JJ’s stability.

Nevertheless, Lani will manage to buy a bit more time. She might convince Eli that he’s got just as much to lose now. Eli told Gabi (Camila Banus) that there were no more secrets between them, but he’s still keeping a big one. You can bet that Gabi would leave Eli over the baby revelation.

Days spoilers say Eli will keep his mouth shut for now. Gabi’s got enough to deal with as it is! With Eli’s help, Gabi will prepare for her upcoming trial. She knows Melinda Trask (Laura Kai Chen) is determined to put her behind bars, so she’ll definitely be worried. Gabi will fear that she sealed her fate when she tried to get rid of the evidence against her.

However, Eli will assure Gabi that she’s got this. He’ll reiterate that he believes in Gabi’s innocence and they’ll hope justice will prevail. In court, Days of Our Lives spoilers say Justin (Wally Kurth) will grill Lani on the stand. He’ll try to make a mess of the case by focusing on what Lani’s hiding.

Justin will want to get to the bottom of Gabi and Lani’s issues. He’ll think there must be more to the story, but Lani will be hesitant to divulge anything. When Justin points out that Lani’s under oath, she’ll finally blurt out that she slept with Eli. There’ll be plenty of gasps and dropped jaws in that courtroom!

As JJ leaps to his feet, Lani will stammer apologies. In that moment, JJ will be too full of rage to notice. Days of Our Lives spoilers state that he’ll rush over to Eli and deliver a major blow. The punch will land JJ in contempt of court, but his day’s only going to get worse.

Lani will admit everything at the police station later, so JJ will struggle with terrible pain. His girlfriend cheated and she’s having another man’s baby, so things couldn’t get much worse! We’ll give you updates as other Days news comes in. Stick with DOOL and don’t forget to check CDL often for the latest Days of Our Lives spoilers, updates and news.