BY Heather Hughes on May 29, 2018 | Comments: 2 comments
Related : Days of Our Lives, Soap Opera, Spoiler, Television 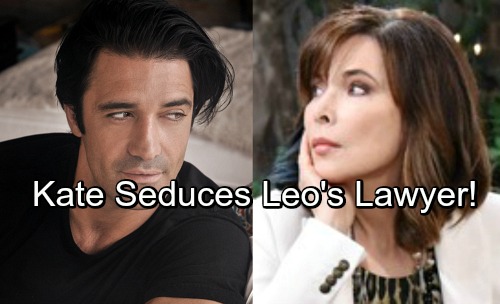 Days of Our Lives (DOOL) spoilers tease that Kate (Lauren Koslow) has some unexpected obstacles headed her way. For starters, the scheme she stumbled into will hit a surprising snag. Kate decided to continue Vivian’s (Louise Sorel) plot with Leo (Greg Rikaart), but what happens when it no longer benefits her? It turns out Chad (Billy Flynn) could be taking the lead at Titan soon enough.

Chad will make a play for the throne since Sonny’s (Freddie Smith) facing sexual harassment allegations. He’ll hope he can use the CEO position to take on Stefan (Tyler Christopher). Of course, Kate wouldn’t want to destroy Titan with Chad in charge. She’d much rather help him out and hopefully bring Stefan’s destruction.

Unfortunately, Days of Our Lives spoilers say stopping Leo could prove difficult. He’s looking for a hefty payday, so he’ll refuse to drop the lawsuit. After all, this is a slam-dunk case. Leo was able to manufacture substantial evidence against Sonny. As his assistant, it wasn’t hard to swipe his phone for bogus texts and set up a camera to capture their sexy moments.

Days of Our Lives spoilers say Kate will need a different plan. She may find one in the form of a handsome new lawyer, but winning him over could be a challenge. Gilles Marini will debut as Leo’s attorney, Ted, on June 5. He’ll be determined to score a victory for Leo, but he’ll also be quite attracted to Kate.

DOOL fans might recognize Marini from his work on The Bold and the Beautiful or other shows like Sex in the City and Devious Maids. It appears Ted will be around for a few months or more, so he’ll have plenty of time to get caught in Kate’s web. Will she lure Ted to her bed and convince him to throw the case? Since Leo’s claims are based on lies, Days viewers wouldn’t feel sorry for the guy!

Will Kate and Ted become a hot couple? Will she fall for him in the midst of her plot? Are you excited to see where this love story leads? We’ll give you updates as other Days news comes in. Stay tuned to DOOL and don’t forget to check CDL often for the latest Days of Our Lives spoilers, updates and news.