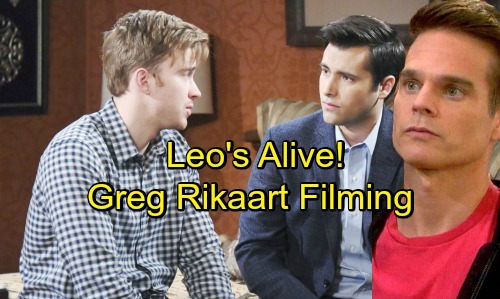 The Instagram photo included Gilles Marini, Greg Rikaart, and Eric Martsolf (Brady) acting goofy and clearly enjoying themselves on the DOOL set. In the caption, Gilles says “Messing around a while ago…with some of my boys on set of @nbcdays.”

This seems to solve a debate among many DOOL fans about Leo’s fate. Of course, the last time we saw Leo, he was without signs of life and was being rolled up in a rug by Will (Chandler Massey) and Sonny (Freddie Smith). But apparently he survived the ordeal.

So, what could have happened? Well, Ted saw what Will and Sonny did, and he might have intervened to save Leo’s life. Of course, if Ted saved Leo, then that means that Leo was probably in cahoots with Ted when Ted tried to blackmail Will and Sonny a while back.

And now Ted’s off canvas for a while, having been “taken care of” by Stefan’s (Tyler Christopher) goons at Kate’s (Lauren Koslow) request. So who knows where Leo is right now and what he’s doing. He may be in limbo waiting to hear back from Ted on how the blackmail scheme is working out.

At any rate, DOOL fans will have to wait a while to see Leo back in Salem. DOOL films about six months in advance, so it will be a while before we know what’s gone down with Leo. But answers are coming!

Are you excited to see Leo come back? Stay tuned to DOOL and don’t forget to check CDL often for the latest Days of Our Lives spoilers, updates, and news.