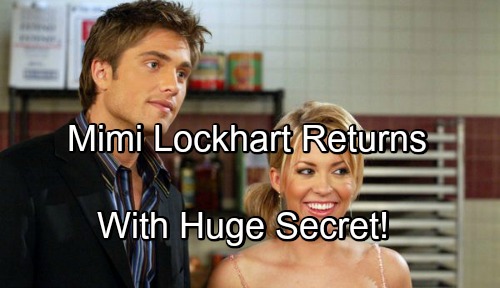 Days of Our Lives (DOOL) spoilers tease that Mimi Lockhart (Farah Fath) is making her way back to Salem, and she’ll have a big secret. Mimi’s first appearance will be on October 5. She last appeared in Salem back in 2007, before she left to go live with her brother Connor (Noah G. Segan) in Arizona.

Mimi’s return coincides with that of Bonnie (Judi Evans). Days viewers will remember that Mimi ad Bonnie were quite the pair, and got into several shenanigans together. Mimi was frequently involved (or dragged into) Bonnie’s schemes and scams, and it looks like Bonnie’s most recent bind will be what brings Mimi back to Salem.

Bonnie’s in serious danger of going back to prison, unless she can somehow convince Lucas (Brian Dattilo) to help set her free. She’s got Lucas convinced that the two of them conceived a baby back in 2017 when she was impersonating Adrienne (Judi Evans). A DNA test appeared to confirm that the resulting baby – which she named Bonnie, after herself – does indeed belong to Lucas.

Of course, Lucas doesn’t want to help Bonnie, but Days spoilers say that he will. He kind of has to, now that Bonnie is threatening to keep Baby Bonnie from him unless he helps her. Bonnie reluctantly called an unknown person to come get Baby Bonnie and keep her in an undisclosed location until Lucas gets Bonnie out of jail.

Chances are, that unknown person who Bonnie called is Mimi. It would make sense, as Mimi is someone who Bonnie would trust to care for her baby. Plus, it would be just like Mimi to come help her mom out of a mess.

But what about this big secret that Mimi’s supposed to have? There’s been speculation that Baby Bonnie is actually Mimi’s baby, and that Mimi is letting Bonnie borrow her for the purposes of getting out of jail. That would certainly be a big secret, but it would it really surprise anyone that much? Lucas is already skeptical that Baby Bonnie is his.

Perhaps there’s an even bigger secret that Mimi is harboring. What could it be? It might have something to do with Rex Brady’s (now portrayed by Kyle Lowder) return, which will occur in early October, right around the time that Mimi will be returning. The ex-lovers will reunite on screen, but it remains to be seen whether the two will get along.

Are you excited to see Mimi back on Days? Stay tuned to DOOL and don’t forget to check CDL often for the latest Days of Our Lives spoilers, updates, and news.