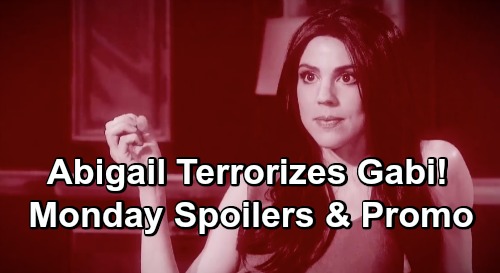 Days of Our Lives (DOOL) spoilers for Monday, December 10, tease that Abigail (Kate Mansi) will play games with Gabi (Camila Banus). She just appeared in her “Gabby” garb, so she might act like her alter’s really back at first. Once she’s had her fun, Abigail will reveal that she’s outsmarted Gabi and intends to take her down. She’ll hurl a few threats and move forward with the next phase of her plan.

Gabi will be in a tight spot since she can’t tell Abigail’s loved ones what she knows. “Gabby’s” return is a crucial part of her plot, so she’ll have to let them keep believing it. Gabi will do her best to handle Abigail’s curveball, but it’s going to be tough. It looks like she’ll have to shift gears and focus mostly on Stefan (Tyler Christopher).

Gabi still has a chance to make Stefan suffer, so she intends to take advantage of it. She’ll hope she can salvage what’s left of this rotten scheme with the paternity shocker. In the meantime, Ted (Gilles Marini) will push Rafe’s (Galen Gering) buttons. He’ll pretend Hope’s (Kristian Alfonso) been sleeping with him behind Rafe’s back, so a fight’s about to break out.

Days of Our Lives spoilers say Rafe’s fury will build until he just can’t take it anymore. He’ll finally punch Ted in the face before questioning Hope. Rafe may not like the answers he gets, but at least Hope didn’t betray him in that way. She’s just been lying about their partnership to take down Ben (Robert Scott Wilson), so Rafe should be somewhat relieved.

Other Days of Our Lives spoilers say Ciara (Victoria Konefal) will get an earful. She’ll endure a stern lecture from Julie (Susan Seaforth Hayes), who understandably has concerns about Ciara and Ben’s romance. Ben may be a reformed killer, but it’s only natural for Ciara’s family to be on edge!

Of course, this is Ciara’s life and she can live it however she wants. She knows Ben has changed for the better, so she’ll defend him to Julie and hope they can just move on. Julie will turn her attention to Abigail eventually, which should bring a good Ben distraction. Days spoilers say they’ll join forces against Gabi later this week, so stay tuned for more DOOL drama.

It sounds like stunning moments are ahead in Salem. We’ll give you updates as other Days news comes in. Stick with DOOL and don’t forget to check CDL often for the latest Days of Our Lives spoilers, updates and news.