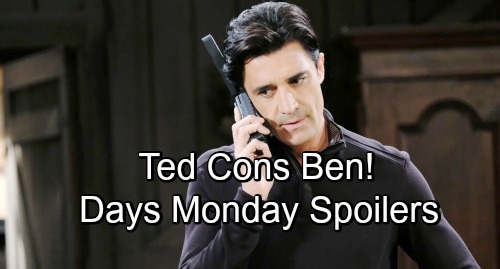 Days of Our Lives (DOOL) spoilers for Monday, December 3, tease that Sonny (Freddie Smith) will repeat his question to Chad (Billy Flynn). He hates to even ask Chad this since the thought of his betrayal sounds so horrible. Sonny doesn’t want to believe that his close friend would turn against him.

Nevertheless, Leo’s (Greg Rikaart) claims about Kate (Lauren Koslow) make sense and now Sonny wants the truth. Sonny needs to know if Chad was in the loop on Kate’s plan. When Chad hesitates, Sonny will fear the worst. He’ll push Chad to admit Leo was right and he’ll eventually get that confirmation.

Days of Our Lives spoilers say Sonny will struggle with this disturbing news. Chad took the CEO position knowing that Kate and Leo were scheming against Sonny. He’s been deceiving Sonny for months, so it’ll be a while before these two get their friendship back on track.

Across town, Gabi (Camila Banus) will head to the hospital to pull off her plan. She’ll slip inside Kayla’s (Mary Beth Evans) office and get on the computer system as quickly as possible. Gabi will do a search for Charlotte’s paternity results and print off a copy. Once she’s got what she needs, she’ll slip out just as fast. Too bad Kayla will return to her office at that exact moment!

Days of Our Lives spoilers say Kayla’s suspicions will once again be on the rise. She’ll try to figure out what Gabi’s up to, but DOOL fans know Gabi can be awfully crafty. She’ll manage to keep her scheme in play for now.

Over with Ted (Gilles Marini), he’ll hope to pry a confession out of Ben (Robert Scott Wilson). It won’t be easy since Ben didn’t start that fire. Ted will try a few tricks and work to nudge Ben into his trap. Let’s hope Ben stays on guard and doesn’t fall for Ted’s sneaky strategy!

Finally, Rafe (Galen Gering) will dig for info on Hope’s (Kristian Alfonso) Smith Island trip. He won’t understand why she’s been so secretive lately. That’s because Hope has teamed up with Ted, but Rafe will start to believe Hope’s cheating on him. He’ll be on a mission to prove it later this week, so expect some Days chaos.

It looks like some shockers are coming up in Salem. We’ll give you updates as other Days details emerge. Stick with DOOL and don’t forget to check CDL often for the latest Days of Our Lives spoilers, updates and news.