BY Heather Hughes on May 13, 2018 | Comments: one comment
Related : Days of Our Lives, Soap Opera, Spoiler, Television 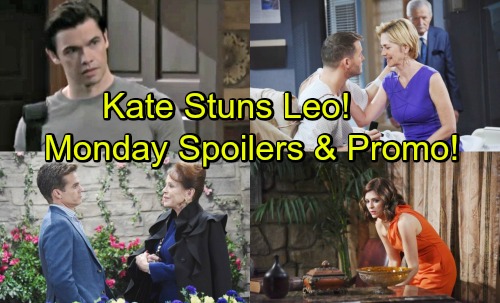 Days of Our Lives (DOOL) spoilers for Monday, May 14, tease that Victor (John Aniston) will deliver an enticing offer. Brady (Eric Martsolf) just proposed to Eve (Kassie DePaiva), but Victor’s hoping it’s not too late to stop this engagement. He’ll suggest that Brady may want to think twice before he blows a big opportunity.

Victor will likely dangle a tempting position at Titan and hope that Brady turns Eve away. Of course, Victor should know better than to think this will work. Brady always falls fast and hard. He went through a rough patch after Nicole (Arianne Zucker) declared her love for Eric (Greg Vaughan), but he’s back to being a cuddly romantic. There’s no way he’ll ditch Eve over business.

While Brady rejects Victor’s deal, Theresa (Jen Lilley) will try to make one of her own. However, she’ll do some panicking first! In Mexico City, Days of Our Lives spoilers say Theresa will have to face Xander (Paul Telfer). She was shocked when he appeared in the doorway, so she’ll definitely worry about his next move. Theresa has no idea what Xander might do to her.

Fortunately, Xander won’t be a threat this time around. As they chat, the wheels will start turning for Theresa. She could really use someone with Xander’s skills right now. Days spoilers state that Theresa will want to team up. She’ll make her pitch and hope that Xander agrees to join her plan.

Back in Salem, Lucas (Bryan Dattilo) will corner Paul (Christopher Sean) for a chat. DOOL fans know Lucas is suspicious of this whole situation with Chloe (Nadia Bjorlin). He feels like something strange is going on, so he intends to trust his instincts. Days of Our Lives spoilers say Lucas will ask Paul for assistance. He’ll urge Paul to help him track Chloe down as soon as possible.

Across town, Kate (Lauren Koslow) will summon Leo (Greg Rikaart) for a meeting. He’ll be surprised when she insists she’s his new boss. Nevertheless, Leo needs the cash and he won’t care who it comes from. He’ll vow to keep up his efforts to seduce Sonny (Freddie Smith) and hopefully bring down Titan.

It sounds like DOOL has an exciting episode in store. We’ll give you updates as other Days news comes in. Stay tuned to the NBC soap and don’t forget to check CDL often for the latest Days of Our Lives spoilers, updates and news.