Days of Our Lives Spoilers Next 2 Weeks: Shots Fired – Sami’s Shocking EJ Deal – Kristen Pushes Brady to Run Away Together 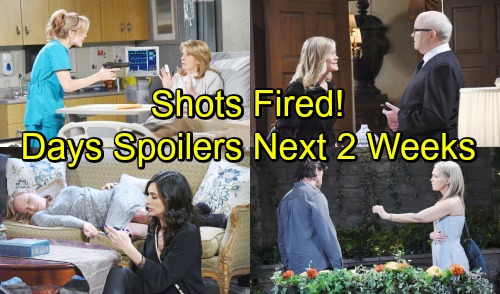 Days of Our Lives (DOOL) spoilers for the next two weeks tease that some fierce faceoffs are on the way. The week of September 24-28 will bring a showdown for Eric (Greg Vaughan) and Brady (Eric Martsolf). After Jennifer (Melissa Reeves) comes clean about everything that happened with Nicole (Arianne Zucker), Eric will march over to confront his brother and unleash his fury.

Later, it’ll be Brady’s turn to lash out. Eve (Kassie DePaiva) will feel the walls closing in, so she’ll decide to confess before Jennifer beats her to it. Days of Our Lives spoilers say Brady will completely lose it. He’ll be appalled that Eve schemed behind his back and ended up costing him custody of Tate (Colin and Kyle Schroder). The lies that followed will make all of this even worse.

While Brady breaks off his engagement to Eve, Justin (Wally Kurth) will come through for Sami (Alison Sweeney). He’ll manage to clear her name at the Salem PD, so she’ll be free to go. Days of Our Lives spoilers say Sami will find more trouble soon after. She’ll arrive at the DiMera mansion looking for Kristen (Stacy Haiduk) and answers about EJ (James Scott).

Across town, Hattie (Deidre Hall) will force John (Drake Hogestyn) to marry her. They’ll have a little hospital wedding, but the real Marlena (Deidre Hall) will awaken in her secret suite. DOOL spoilers state that Kristen will also make an appearance at the hospital. She’ll give Sami the slip and barge in “Marlena’s” room to kill her!

Hattie will insist that Kristen’s got it all wrong, but the vengeful DiMera may not buy it. During the week of October 1-5, Days spoilers say Roman (Josh Taylor) will dive for the gun. A struggle will ensue, so don’t be surprised when a shot’s fired. Back with Sami, she’ll start to get desperate. Sami will propose a deal that would help Stefan (Tyler Christopher), but she’ll ask for something in return.

If Stefan wants the benefits, Sami will expect to hear everything he knows about EJ. She’ll feel confident that Kristen shared some details with Stefan, so this is her best option. At the Horton house, Chad (Billy Flynn) will discover proof of Abigail’s alters. He’ll most likely be horrified by the sight of that black wig.

Other Days of Our Lives spoilers say Kristen will prey on Brady’s vulnerability. She’ll even insist that they should run away together! Brady won’t take Kristen up on that, but he may be tempted. He’ll definitely struggle as he works to get over Eve’s betrayal.

Some great episodes are coming up on the NBC soap. We’ll give you updates as other Days news emerges. Stay tuned to DOOL and don’t forget to check CDL often for the latest Days of Our Lives spoilers, updates and news.