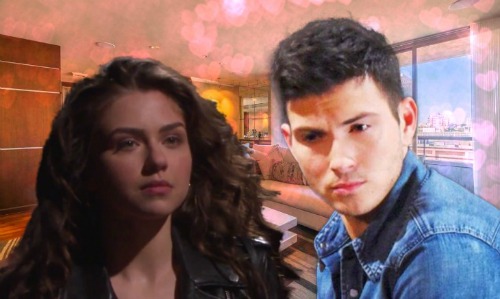 Days of Our Lives (DOOL) spoilers tease that Ciara (Victoria Konefal) will continue to be pulled toward Ben (Robert Scott Wilson). She knows he’s dangerous, but maybe that’s part of his appeal deep down. Ciara’s a bit of a rebel, so it makes sense that she’s drawn to this bad boy.

Of course, Ciara doesn’t condone Ben’s murders and he doesn’t either. Ben’s truly remorseful for all the suffering he caused. He’ll always be haunted by his string of killings, but all he can do is move forward. Ciara’s been helping him do that, so Ben will remain drawn to her as well.

Tripp (Lucas Adams) was taken aback when Ciara defended Ben. She refused to let Tripp say anything negative about him. Tripp filled Claire (Olivia Rose Keegan) in later, so should be ready to pounce soon. She may see this as her ticket to being with Tripp and finding some happiness.

Days of Our Lives spoilers say Claire will have a chat with Ciara next week. She’ll point out that she was terribly worried when Ciara vanished. Claire was a guilty mess, so she’ll be telling the truth. Still, that doesn’t mean Claire will give up on Tripp. She won’t see why she should if Ciara’s moving on with Ben.

Before Claire makes another move, she’ll want to confirm that Ciara’s indeed interested in the town pariah. Claire should really be telling Ciara to run in the opposite direction. Hope (Kristian Alfonso), Rafe (Galen Gering) and Tripp’s reactions are perfectly reasonable under the circumstances. They want Ben as far away from Ciara as possible.

Most normal people would feel that way if a serial killer started hanging out with a loved one. Reformed or not, it’s risky! Nevertheless, Days spoilers say Ciara will keep sticking up for Ben. She’ll grow closer to her former rescuer despite all DOOL’s worrywarts.

As for Claire, she may not have a huge problem with Ben and Ciara’s bond. Just because she should warn Ciara doesn’t mean she will! Claire will undoubtedly assume this could boost her chances with heartbroken Tripp. She’ll be there waiting to comfort him thought his fears and devastation.

Claire will push Ciara to admit she’s inching toward Ben now. She’ll obviously be hoping for the greenlight on a Tripp romance. Ciara probably won’t be ready to commit to Ben just yet. She’ll most likely tell Claire to do what she wants anyway, but it’ll take time for Ben and Ciara’s connection to fully develop.