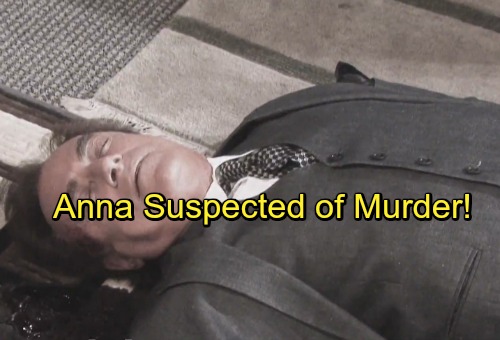 Days of Our Lives (DOOL) spoilers tease that Andre’s (Thaao Penghlis) murder will lead to problems for many Salemites. Several DOOL characters have basically delivered death threats and more are on the way. Anna (Leann Hunley) made her opinion of Andre clear in Monday’s episode, January 15. She suggested that he’d get what he had coming and he certainly will this Friday, January 19!

After Andre bites the dust, a murder investigation will kick off. Rafe (Galen Geling) and Hope (Kristian Alfonso) won’t be shedding any tears for Andre. In fact, they should be glad he’s dead. Nevertheless, they still have to do their jobs and that means catching the killer. There’ll be a murderer on the loose in Salem, so they have to follow the clues and figure out who’s responsible.

Days of Our Lives spoilers say Roman (Josh Taylor) will naturally be concerned. He understands that Anna hates Andre with a passion. Roman will likely fear that Anna did the deed. When Roman starts digging for more info next week, Hope will offer a warning. She’ll contend that Roman needs to butt out of this investigation.

Roman’s no longer with the police force, so there’s no need to meddle. Hope will promise that they’re going to be fair and honest about what they find. That may be exactly what Roman’s afraid of. He’ll undoubtedly worry that Anna could end up in prison for murder.

Of course, Days spoilers state that Roman may not listen to Hope. He might decide that he can’t just sit back and do nothing. Roman’s the kind of guy who looks into things, so he might as well conduct an investigation of his own. He may not like the evidence he comes up with.

Days of Our Lives spoilers say Roman will tell a few fibs a little later. He’ll lie to protect someone close to him. Perhaps Roman will feel the need to cover for Anna. He probably won’t know if she truly committed the crime, but he’ll know she’s near the top of the suspect list. Anna could definitely find herself in hot water!

Do you think Anna will be guilty or will Roman have it all wrong? We’ll give you updates as other Days news comes in. Stay tuned to DOOL and don’t forget to check CDL often for the latest Days of Our Lives spoilers, updates and news.