BY Heather Hughes on May 24, 2018 | Comments: 2 comments
Related : Days of Our Lives, Soap Opera, Spoiler, Television 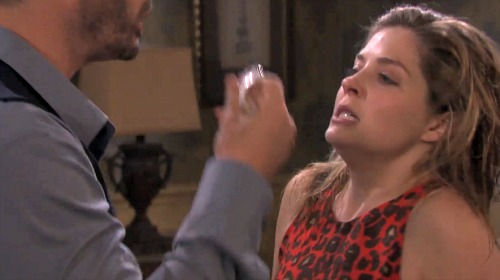 Days of Our Lives (DOOL) spoilers tease that Brady (Eric Martsolf) will wrestle with his feelings for the Donovan sisters. He’s fallen in love with Eve (Kassie DePaiva), but he still loves Theresa (Jen Lilley) as well. Brady’s struggling to deal with this sudden shocker. He had his future with Eve all mapped out, but Theresa’s return really threw him for a loop.

DOOL fans know Theresa sacrificed her own happiness to protect her loved ones. Brady and Tate (Colin and Kyle Schroeder) would be dead right now if Theresa hadn’t cooperated. Even Eve (Kassie DePaiva) would’ve been at risk, so she really needs to show a little gratitude. Theresa did what she had to do to keep her family alive.

That fact will undoubtedly weigh on Brady as he mulls all this over. He’s made promises to both women, so breaking some of them is inevitable. Brady will just have to follow his heart and hope he doesn’t cause too much pain.

Theresa has been enduring a horrific life with a ruthless drug lord. If that doesn’t show how much she loves Brady…well, what would? Plus, Brady and Theresa share a child together. As Brady watches Theresa and Tate reconnect, that could also influence his decision.

It’d be nice if Brady could reflect on his “marriage” to Theresa. That wasn’t a legal ceremony, but they did exchange vows privately in some sweet bedroom scenes. Days of Our Lives has been throwing in several flashbacks, so maybe that memory will eventually resurface for Brady.

It sounds like Brady will be all set to choose Theresa, but another Days bombshell will alter his plans on next week’s new Days episodes, May 28 – June 1. There’s a good chance this is about Chloe (Nadia Bjorlin). Brady may find out that Theresa left Chloe in Mateo’s (Andoni Gracia) grasp. She also lied about getting updates on Brady’s new relationship from Victor. Chloe’s the one who actually filled Theresa in, so Brady won’t be happy.

However, it wouldn’t have done any good for Theresa to stay there and die with Chloe. Xander (Paul Telfer) insisted they had to leave ASAP, so there was nothing Theresa could do. Coming clean to anyone else would’ve put Theresa’s loved ones in harm’s way again.

Mateo thinks Xander took Theresa to carry out a revenge plot. He surely assumes Theresa’s dead and gone by now. Theresa will explain all that to Brady, but he’s not too bright. He won’t understand her justified actions, so Theresa will face total heartbreak. Days of Our Lives spoilers say Brady will wash his hands of her!

Can Theresa find a way to win Brady back? Will he marry Eve before in the meantime? We’ll keep you posted as other Days news comes in. Stick with DOOL and don’t forget to check CDL often for the latest Days of Our Lives spoilers, updates and news.